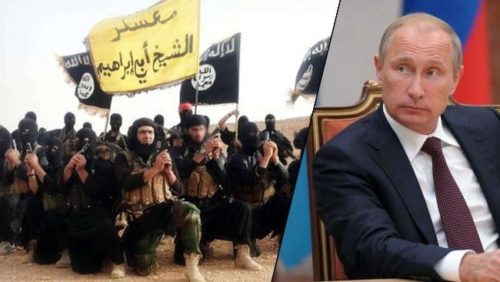 THROUGHOUT the rest of the world — unlike here in America where the Jewish MSM have kept Americans in the dark — people understand that ISIL and most of these “radicalized Muslim terrorists” are products of Western intelligence organizations and funded by your tax dollars — either directly or indirectly through American/Israeli proxies in the Sunni Muslim community such as Saudi Arabia, Qatar, UAE, and Turkey. While Obama is getting media coverage for his push for more gun control, Putin is busy cleaning up the US/Jewish mess in Syria. Interesting, too, is that China and Iran have joined in the fight against these “Western” intelligence agency backed groups. But Putin is running the show.

As Wayne Madsen reports, “Putin recently told Israeli Prime Minister Netanyahu in Moscow that any Israeli interference with Russian military action against ISIL in Syria would be met with force. Netanyahu, who has already alienated Obama, was left with little room to maneuver and he has no other choice but to comply with Putin’s stand-down order in Syria and over the eastern Mediterranean.”

Putin knows how to put Netanyahu and Israel in their place. As crazy and fudged up as they are, the Zionists know they cannot take on Putin’s Russia and China and Iran simultaneously. Game, Set, and Match.

Perhaps this is what the Chicago Jews who put Obama in office ultimately wanted: to be able to put a check on Netanyahu and company. Perhaps nutty Netty was too much for them to handle by themselves, so it took a State actor such as Putin to do it. I’m speculating a little bit here but just ask yourself “who benefits” when the dust settles.

The Jews just lost some influence in the M.E. — but they still dominate here in America. Expect continued open borders, and more multiculturalism/cultural Marxism in the form of “sexual diversity.” Now that “gay marriage” is considered passé, and that being Black is now boring and “too ghetto-ish,” look for the ascendancy of the “trans-gendered,” and of the pedophile right behind that — with a side order of same-sex incest thrown in for good measure. By their nature, the Jews always have to be screwing with other people’s business/culture. With the rise of Putin in Syria, their dreams of a greater Israel just got put on a back burner. Yes, they are still thinking about it — but let’s face facts: They are not going to be pumping water out of the Euphrates River any time soon.

What follows is a good article by Madsen, shows how much these “Muslim terrorists” were funded by your tax dollars and trained by your military.

AS Russian President Vladimir Putin followed up his request before the United Nations General Assembly for a grand coalition to combat the Islamic State of Iraq and the Levant (ISIL) by launching Russia’s first air strikes on ISIL positions near Homs in Syria, President Barack Obama belatedly got around to issuing sanctions and asset freezes on a number of ISIL officers and fighters tied to Western intelligence services.

In a frosty meeting at UN headquarters, Putin told Obama in no uncertain terms that if the United States were serious about defeating ISIL, it would stop demanding the overthrow of Syrian President Bashar al Assad and get serious about fighting ISIL. Obama’s program to “train and equip” Syrian “moderate” rebels has been exposed as a fraud since even the Pentagon admitted that U.S. weapons and ammunition destined for the “moderates” ended up in the hands of Al Qaeda allies in Syria.

After rejecting Putin’s offer, Obama held a photo-op “anti-terrorism” conference in New York attended only by Iraq’s Prime Minister Haider al-Abadi, Nigerian President Muhammadu Buhari, Norwegian Prime Minister Erna Solberg, and French Foreign Minister Laurent Fabius. The French foreign minister, who takes a generally pro-Israeli line, announced that France was opening up a war crimes inquiry against Assad even as the United States moderately softened its position by stating that Assad’s departure is not a prerequisite for concerted international action against ISIL.

All Obama could announce at his much-ballyhooed anti-terrorism “summit” was a freeze on the assets and other sanctions against top ISIL field commander in Syria Col. Gulmurod Khalimov, the former chief of Tajikistan’s OMON Special Forces who was trained in the United States by CIA, Blackwater, and U.S. Special Operations Command personnel. A year after France submitted the name of French citizen Emilie Konig, who traveled to Syria in 2012 to fight for ISIL, Obama decided to sanction her, as well. Obama also sanctioned French citizen Maxime Hauchard who joined ISIL ranks.

It was not until September 2014 that Obama decided to sanction ISIL’s U.S.-trained Georgian field commander in Syria, Tarkhan Batirashvili, also known as “Omer the Chechen” and Abu Umar al-Shishani. Omer, while a member of the Georgian Special Forces, was trained by U.S. Special Forces and was considered one of their “star pupils.” Originally under orders to fight alongside U.S. troops in Iraq, Omer was instead sent to fight the Russians in South Ossetia. He then “defected” to ISIL after spending time in Istanbul.

Omer’s Chechen-Georgian colleague in ISIL, Murad Margoshvili, also known as Muslim Abu Walid al Shishani, and the head of Junud al Sham in Syria, an ISIL affiliate, is said to have been recruited by Batirashvili in the Pankisi Gorge of Georgia to help fight Russian troops in the Caucasus republics of Chechnya and Karachay-Cherkessia. The presence of so many anti-Russian terrorists in Syria is reason enough for Putin to take decisive action against them. The fact that so many American weapons have fallen into the hands of these Georgians, Chechens, and others from the Caucasus coupled with the fact that some received U.S. training at secret bases in Turkey and Jordan has infuriated Putin about Obama’s actual motives in Syria and beyond.

Not sanctioned by Obama were Kevin Guiavarch and Salma Oueslati, a married French couple who joined the Al Nusra Front in 2012. Although Al Nusra combatants have been linked to both Al Qaeda and ISIL, they have received U.S. weapons, ammunition, and training as part of the now-failed U.S. program to train Syrian “moderate” guerrillas. Also not sanctioned is Oumar Diaby, the Senegalese commander of an Al Nusra force in Syria. Also just sanctioned by Obama is Sally Jones, the 45-year old British mother from Kent, England who said she joined ISIL to “behead Christians with a blunt knife.”

The U.S. has dragged its feet on sanctioning other ISIL fighters from Indonesia, Kosovo, Bosnia-Herzegovina, China’s Xinjiang-Uighur Autonomous Republic, and Uzbekistan. The presence of as many as 3,000-4,000 Uighurs from China among ISIL forces in Syria prompted China to send to the Syrian port of Tartus an aircraft carrier, Liaoning-CV-16 and a guided missile destroyer. Chinese military advisers are said to accompany the ships. At the same time, Russia is recommissioning its long-abandoned airbase at Latakia, Syria by turning it into a forward operating base where Russian planes are already conducting sorties against ISIL around Homs.

The Chinese war ships, along with the Russian guided missile cruiser Moskva, the guided missile destroyer Smetlivy, the intelligence ship Donuzlav, and the landing ship Novocherkassk have put the United States and Israel on notice that these two powers will no longer put up with half-hearted U.S. and Western action against ISIL. Putin recently told Israeli Prime Minister Binyamin Netanyahu in Moscow that any Israeli interference with Russian military action against ISIL in Syria would be met with force. Netanyahu, who has already alienated Obama, was left with little room to maneuver and he has no other choice but to comply with Putin’s stand-down order in Syria and over the eastern Mediterranean.

There are also reports that Iran is preparing to send a naval force to Syrian waters to assist the Russians and Chinese. Last year, it dispatched the frigate Alvand and a supply ship to the eastern Mediterranean as a show of support for Assad’s government. Iran has reportedly sent some 1000 troops, including members of the elite Iranian Revolutionary Guard Corps (IRGC) Qods Force, to Syria to bolster Lebanese Hezbollah forces already in the country.

Armenia, which has hosted thousands of ethnic Armenian refugees from Syria and Iraq and which has recently established an air defense union with Russia, may also play a role in providing troops to establish a final bulwark against ISIL in the Syrian coastal region around Latakia and Tartus where a number of Armenians, as well as Alawites, Greek Orthodox, and Shi’as remain.

Putin is correct in claiming that Obama was always more interested in deposing Assad and his government than in seriously taking on ISIL. The Islamist caliphate declared by ISIL receives its financial and moral support from Saudi Arabia, Qatar, Turkey, and the United Arab Emirates and logistical support from Israel.

This Western alliance with the Wahabists has been countered by a new intelligence-sharing pact between Russia, Iran, Iraq, and the Syrian government in Damascus. With China sending its ships to Tartus and Russia beefing up its military squadrons in Latakia, a new military alliance is shaping up in the Middle East, one that does not take its orders from either Washington or Jerusalem.

What Drove Truman’s Presidential Policy on Israel? Threats by Jews
Jews: Taming the Chinese Under the Guise of "Scholarship"
British Teenagers Will Go on Trial for Stealing Artifacts from Auschwitz-Birkenau
Judaism Attracts Psychopaths and Killers: The Case of Eli Hazeev
Hoaxing Jewsplained
Peter Stuyvesant, New Amsterdam, and the Jews
The Revolt Against Civilization: The Menace of the Underman (Part 17)
Jew Who Created Thousands of Hate Hoaxes and Threats Will Not Be Extradited
Tags:AmericaBarack ObamaChinaIranISISIsraelJewish SubversionJewsmilitaryMuslimsRussiaSyriaTerrorismVladimir Putin

Walk This Way! Yiddish Sign Orders Women to Move Over

Clearly, Mr Putin has the intestinal fortitude that our presidents have lacked for 80 + years. He is a flawed but courageous man.

How does Russia and CHina justify interests in this region any more than the USA? Except their obedience to Israel.

If these “leaders” are really interested in justice the “real problem” could easily be eliminated in moment and peace could be possible here. But that will not happen.

It is clear , who is really in control.