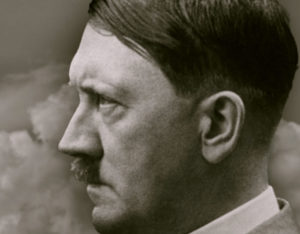 by Hermann Okraß, Hamburger Zeitung, 2 May 1945

HE ONCE SAID: “I wish nothing on my gravestone other than my name.” Even his name will probably not stand over his grave, for we know that he must have perished while fighting bitterly in the Reich Chancellery. We know that the enemy will be able to find a body in the ruins caused by countless artillery shells and countless flame throwers, and that they may say that it is the Führer’s body, but we will not believe it. If the enemy says that, we will not believe it. That his body is dead we believe, what is mortal of him has perished, has passed away, but he has fulfilled his most beautiful oath, this affirmation: “The most valuable thing God has given me on this world is my people. My faith rests on them, I serve them with my will, and I give my life to them.” His life is fulfilled. He began by fighting for his people, and he ended that way. A life of battle.

Now the world will attempt to explain him. Books will be written about him, some praising, others cursing him. People will criticize him, people will pray for him. A great one has left this world, and where a strong, bright light is extinguished, creatures suddenly appear in the twilight that had hidden from the bright light. That is all foreign to us, far from our way of thinking. For this we affirm: We swore an oath to this man and his teachings, we pledged ourselves to him during our people’s dark days, we rose with him to the heights to which he led our people in the brief, beautiful years of peace, and like all good Germans, we stood by him in battle. The world should not appear small and shabby to us because the victors can rejoice. We can confidently leave his judgment to world history. We today cannot decide it.

But will posterity be able to understand him fully? It is hard for contemporaries to pass judgment about someone of their own era, particularly if it is one as unique as Adolf Hitler. Posterity sees the great from a distance, reads his words, reads our words, but it cannot understand the world of our day in all of its breadth. One can only hope that they believe the great words of the great man. “One could give me whole parts of the earth, but I would rather remain the poorest citizen of this state. — I am not so crazy as to want war. — I was a worker in my youth, and have remained one in my inmost being. — We are not fighting for theories, nor for dogmas. It make no difference whether or not we live. The only thing that is important is that our people lives!”

How will these words sound to posterity? Will they be able to understand why a whole people, in the midst of its deepest poverty, affirmed this man? We may only hope so, for we know that world history will then truly understand this man, his teachings, and our age. We see that more clearly today than ever before, we see it proven by the immeasurably hard battle that our people has withstood so bravely, we see it in the silent unspoken loyalty of the poorest sons of our people that Adolf Hitler gathered as a lens that focuses all light on a single point; the most beautiful virtues, the most fervent desires, the noblest longings, the beautiful will of our people, the longing for the Reich, the drive for social justice, the will for freedom, for clear leadership, our people saw that all united in Adolf Hitler and his idea. That little minds darkened the image of his clear will, that traitors and bad counselors deserted and betrayed him, that finally he was overcome by a great superiority of steel and money, that cannot change the image of him that is in the deepest heart of our people. The present hour may perhaps dim that image, the enormous sacrifices, the sorrow and misery, may distort it, but when one day the senses clear, when thoughts are once again free, he will appear once more even to the last people’s comrade as he did in days in which the whole nation joyfully affirmed him.

The man is dead. He fell fighting. He remained loyal to himself. He wanted the best for his people, which is why it loved him so much. We know that he will continue to live in our land not as a war hero in the form of a metal statue, but rather as a child of the people whose pure will the people understood, and whose most beautiful words will remain a memorial for us, his words that in a people’s deepest need, one must love his people more than himself.

American Gun Memes and Hitler
How the Daily Mail Has Changed!
World War 2: Again and Again, Germany Tried to Prevent It
Varieties of White Religious Experience
The Myth of Gun Control Under Hitler
How Republicans Can Help Netanyahu
Hitler on Religion
Wagner: Desecrated but Undefeated
Tags:Adolf HitlerFarewell to HitlerHermann OkraßHitler's Death

The Vast Journey of the Fourth Generation

The Destruction of Joe McCarthy

That was beautiful. I wish I could write like this. Heil Hitler!

Will W Williams
Reply to  Pagan

Very few can write inspiring words like that, Pagan; we aren’t meant to. But all of us who have computers can easily pass those words and this Web site address on, far and wide, to inspire others. We desperately need to inspire our people to organize under one banner: https://natall.com/about/what-is-the-national-alliance/ I dare say Mr. Hitler would approve.