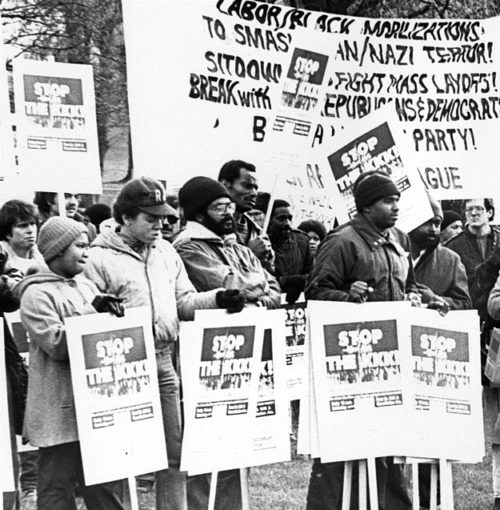 A FEW WEEKS ago — Saturday, November 27, 1982 — 36 members of the Knights of the Ku Klux Klan, with headquarters in Tuscumbia, Alabama, gathered in the nation’s capital to protest the racially destructive policies of the U.S. government. The group’s spokesman, Thom Robb, was especially critical of the Simpson-Mazzoli bill, legislation now in Congress which would permit millions of non-White, illegal aliens to remain in the United States and eventually become U.S. citizens. In fact, the stated purpose of the Klan’s Washington protest meeting was to call public attention to this bill.

As it turned out, the Klan wasn’t given much of a chance to express its views on illegal immigrants or anything else. Washington police, citing the danger of violence, forced the group to cancel a planned march down Pennsylvania Avenue from the Capitol to the White House and then hustled the 36 Klansmen secretly out of the city only a few minutes after they had gathered for their meeting. Despite the fast shuffle they were given by the police, the Klansmen’s behavior was a model of orderliness and legality. Not only had Klan leaders notified city and Federal authorities of the details of the planned meeting and march and obtained the required permit, but every police order was scrupulously obeyed by the Klansmen during the time they were in Washington.

By way of contrast, some 5,000 anti-Klan demonstrators, who had gathered in Washington on the same day to protest the Klan’s presence, went on a stone-throwing, cop-taunting, window-smashing rampage of looting and destruction, which sent more than a dozen policemen to the hospital and cost local merchants hundreds of thousands of dollars in damage and stolen merchandise. Fortunately, the television camera crews were out in force, and so most of the nation’s TV viewers were enlightened by the sight of Black looters climbing through smashed store windows just a few blocks from the White House, their arms loaded with stolen bicycles, jewelry, cameras, clothing, and whatever else they could carry off, while the police, in order not to further “provoke” them, generally made themselves scarce. No looter was shot, and only 38 arrests were made.

Now, what conclusions do you imagine the controlled news media came to about the whole business? That they had been wrong to portray the Klan, in dozens of editorials and articles written in the weeks between the Klan’s initial announcement of its intention to hold a protest march in Washington and the day of the demonstration, as a gang of violent, hate-crazed criminals and their opponents as loving, high-minded champions of equality and brotherhood?

Do you imagine that the calm and dignified demeanor of the Klansmen as they attempted to have their march caused the media to decide that perhaps they weren’t such terrible fellows after all and that the police should have made an effort to protect their right to march peacefully down Pennsylvania Avenue? Or that the behavior of the anti-Klan demonstrators, as they screamed “Kill the Klan!” from hate- contorted faces and hurled bricks at the police, persuaded the editors and columnists that hating the Ku Klux Klan is no guarantee of saintliness?

You and I both know the controlled media better than that! Read, for example, a little of what the Washington Post’s Dorothy Gilliam wrote for the edition of that newspaper which appeared on the Monday after:

“… (T)he counter protesters … sent a message of strong resolve: certain vulgarities, such as the appearance of the KKK, just won’t be tolerated in the nation’s capital.”… It is unfortunate that the anti-Klan demonstrators became angry when they were denied a confrontation with the white-sheeted purveyors of hate and subsequently vented their fury on the most available symbol — police authority. But it should be remembered that the crowd was orderly until its members were denied … their right to confront the Klan. …

“The looting did no credit to the anti-Klan movement. But in any war, no matter how heroic are the soldiers, there will be some among them who will rape, rob, and plunder. …

“But it would be a mistake … to let the looting and police battling detract from the central theme of the day: The masses were outraged at the Klan’s presence and would not let the Klansmen flaunt it in their faces.

“At one point, when a black man was grabbed by three policemen, the racially, economically and culturally mixed crowd chanted, ‘Turn him loose. He is not the Klan. Turn him loose.’ The police let the man go.

“… The anti-Klan protesters had a right to anger at this venerable, inflammatory symbol of hatred, violence, and white supremacy.

“It was clear, too, that Americans regard Washington as a home of all the people, and while it may be all right for the Klan to strut in Alabama, some things won’t be permitted here.

“It would be a shame if conservatives — particularly the people in power who have created the climate in which the Klan rally could take place — don’t get the message of the masses. For on Saturday, in the speeches and banners, it rang out loud and clear: The KKK is part of a level of obscenity we won’t tolerate …” 1

Still, there was all that looting, those smashed windows, those overturned police cars, those injured policemen to account for. If those things couldn’t be blamed on the Klan, someone else must have been responsible — someone else, that is, other than the “heroic soldiers” who were protesting against the Klan. Would you believe it was the Palestinians?

Read what was on page one of the Washington Post the day after the riot:

“For hours the rhetoric had been building as some 500 demonstrators, including hundreds of Palestinian sympathizers, marched from the Ellipse to McPherson Square, and an additional 5,000 anti-Klan protesters rallied near the Capitol. …”They had come there from New York, Boston, and New Jersey, a youthful, predominantly white (emphasis added) group, dressed in knit caps, jeans, and down jackets. By the time word had passed through the crowd that the Klan was just a block away in Lafayette Square, the atmosphere was right for a confrontation.

“Some of the Palestinian supporters threw their banners at the police. Teen-agers in the crowd pulled bricks from the sidewalk, broke them in pieces, and threw them at police. Others hurled bottles.”2

So now we know who started the riot. It wasn’t the 5,000 assorted Blacks, White Jesus freaks, rabbis, Christian preachers, TV-hypnotized race-mixers, labor bosses, and local politicians who were shouting their “Black power!” and “Death to the Klan!” slogans at the Capitol. It was 500 of those dirty, Israel-hating Arabs in McPherson Square. Of course, the Washington Post didn’t actually say that Palestinians did it. The Washington Post said Palestinian supporters. Do you think Joe Sixpack will catch that distinction?

The truth of the matter is that the people who started the riot weren’t even genuine supporters of the Palestinians. Nor were they predominantly White. They were predominantly Jewish, members of Trotskyite Communist groups such as the Progressive Labor Party. These groups, fully aware of where the sympathies of most non-Jewish welfare recipients lie, have seized the issue of Israel’s genocide against the Palestinians solely as a mask for their Jewishness, so that they can more effectively carry on their agitation and organizing among the predominantly non-White rabble who are their constituency. To this end they have organized a number of front groups claiming to oppose U.S. government’s backing of “Zionist racism” in the Middle East.

These groups drove through the Black neighborhoods of Washington with sound trucks on Saturday morning, inciting young Blacks to come out into the streets and riot. Not only did the police not see fit to interfere with this incitement, but the Washington Post did not see fit to mention it to readers, except in briefly quoting a local Black preacher-politician, Reverend Walter E. Fauntroy, who complained bitterly about the “white radicals” who had come into town, stirred up his constituents, and then gone back to New York, leaving the local Blacks to face the criticism for rioting and looting. “Trotskyite radicals,” he said, “got what they wanted — pictures of Black youths looting and throwing bricks … showing America that Blacks are oppressed brick throwers.”3

National Alliance observers on the streets saw Jewesses with transistorized megaphones, screaming out their hatred of the Klan to the Blacks in New York accents, egging them on, telling them where to go and what to do, in scenes reminiscent both of the “civil rights” movement of the 1960’s and the “peace” rallies of the Vietnam era.

There are two lessons for White Americans in all of this, regardless of their feelings toward the Ku Klux Klan. The first lesson is the fatal folly of appeasement. There are far too many Whites — by no means all of them liberals — who believe that the way to achieve peace, prosperity, and happiness is to grease the squeaking wheel. To these people the answer to a Black riot is not tanks and machine guns but more welfare. They reserve their wrath for boat rockers like the Klansmen.

They have learned nothing whatsoever from the sorry record of more than three decades of appeasement of non-Whites. “Peace, peace!” these fools cry, and they cannot see that there is no peace. Nor do they seem concerned by the fact that wherever non-Whites have been given the upper hand — as in Washington, D.C. — the civil rights so noisily agitated for in the past, when Whites ruled, have gone by the board. Only Whites are so foolish as to believe that freedom of speech should be extended to one’s enemies as well as to one’s friends. Blacks and Jews have better sense. A member of the Ku Klux Klan has no more freedom in Washington than a member of the Palestine Liberation Organization has in Tel Aviv.

Unfortunately, the appeasers are quite beyond reason, and the recent events in Washington have taught them nothing. They still see the easiest — and therefore the best — course as avoiding any provocation of the dark forces they fear. As the feminization of the White American male continues, the ranks of the appeasers will grow. They will only be turned from the course of race suicide when confronted by a new force stronger and even more brutal than the ones to which they now respond.

The other lesson — and it is hardly a new one — is that so long as the news and entertainment media in America remain in the hands of the Jews, there can be no hope for a White future.

Jewish Ritual Murder: Real or Imagined?
15 of the Top 25 Financial Donors in This Election Cycle Are Jews
Why the Jewish Lobby and the EU Hate Poland's Judicial Reforms
Why I Believe Simon Wiesenthal Was a Fraud
The Christian Patriot Question
Our Heritage, Our Freedom, and Our Future, Part 1
The World in False Face
Rabbi: Jews are Not of This World; We're Sent to Conquer It
Tags:Black RiotingCivil RightsControlled mediaDr. William L. PierceIllegal ImmigrationJewsKu Klux KlanWhite Americans

Why Was Thomas Watson's Statue Removed?

Brief Review: The Gestapo -- The Myth and Reality of Hitler's Secret Police, by Frank McDonough

The futility of holding any sort of pro-White demonstration under hostile conditions, especially media, should be noted as well.