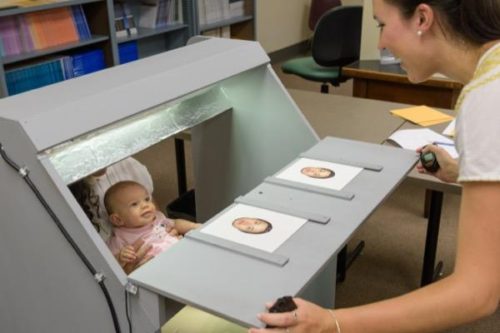 TO THEIR SHOCK and dismay, researchers at the University of Delaware have found that infants as young as three months old have already succumbed to the toxic poison of societal racism and thus favor women who look like their mothers over women from other races. Such bigoted youngsters clearly display “unconscious racial biases” rather than “natural racial preferences.” But a study in the journal Developmental Science claims that with enough aggressive cognitive conditioning, they can be cured.

Researchers “wanted to see whether the children’s unconscious racial biases could be disrupted,” so they placed Chinese infants under a rigorous program of cognitive reconditioning that, at least temporarily, subverted their natural affinity for people who look like themselves. It is settled science that children need to be taught to be racist, which is why three-month-old infants are forced to undergo Clockwork Orange-style mental reconditioning that teaches them not to be racist.

Recent research shows that our brains start developing unconscious racial biases when we’re only just months old. For example, a study published in 2005 suggests that even three month old babies show preference for faces belonging to their own race.

University of Delaware worked with researchers in China, France and Canada to conduct a study on a class of Chinese kindergartners who exhibit signs of racial bias.

The scientists showed the kids computer-generated images of faces that looked equally Asian and African, and also displayed happy and angry expressions. Given that the children spend most of their time around Asians, they tended to identify the happy faces as Asian and the angry faces as African.

Then, the kids looked at images of African faces and learned to associate each individual face with a name.

“If you can get the kids to start thinking about members of other races as unique individuals, you’re going to be more likely to prevent stereotypes from sweeping in and generalizing across all of the ‘same-type’ faces,” said Paul Quinn, a UD psychology professor and co-author of the study.

When Quinn and his colleagues showed the kindergartners the racially ambiguous faces again, the number of times they identified the angry face as African dropped significantly.

Though the difference before and after the task was striking, Quinn isn’t sure how long this effect will last.

“If get the children to come back a week later, where they have returned to their environment and again are seeing mostly Asian faces, would you find that the effects of the training would hold up? Or would you have to hold a refreshment type of training?” inquired Quinn.

The study was published in July in the journal Developmental Science.

Czech Republic Advocates Use of Army to Protect Borders

Occupied Germany to Facebook: Clamp Down on Holocaust Denial -- or Else