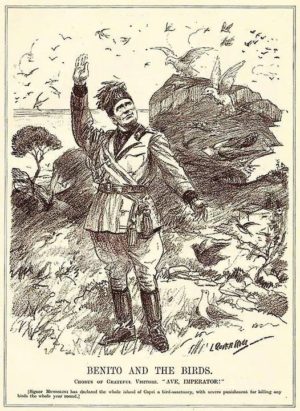 Isle of Capri declared a bird sanctuary in 1932

ENVIRONMENTAL POLICY was first advanced in fascist nations. Mussolini’s Italy and Hitler’s Germany were far ahead of the nations of their day. In the cartoon image below, from Punch in 1939, Mussolini’s 1932 declaration of the Italian island of Capri as a sanctuary for birds is depicted. Mussolini is shown as steward of nature and protector of the birds of Italy, giving them a safe and secure domain, away from poaching hands; one grateful bird looks up at him. Beneath the image are a handful of newspaper articles on the event.

From Berkeley Daily Gazette, “New Bird Haven in the Mediterranean,” 1 April 1933; click on the clipped article or follow the source to get a much clearer version.

In early the next year, this article, from the same paper, notes American admiration for the Duce’s policy and speculates about whether the US might do the same for song birds.

This is from San Jose News, 27 April, 1934, summarizing the policy and formation of a “Scholar’s League for Preserving Little Birds,” with its patron Saint, Francis of Assisi.

The Racial Awakening of the German People, by Dr. Rudolf Frercks – Part 1
Mysterious Crystals Compel Scientists to Change Stance on Earth's History
Today, Tomorrow, and Forever
Folk and Land
Adaptive Differences and Abnormalities
National Life – From the Standpoint of Science
Italian Patriot Gets Prison and Fine for Protesting Against the Asylum Invasion
There's Only One Way
Tags:Adolf HitlerBenito MussoliniEnvironmentFascismItalyNational Socialist GermanyNature