Israel: Apartment Complex is for Jews Only 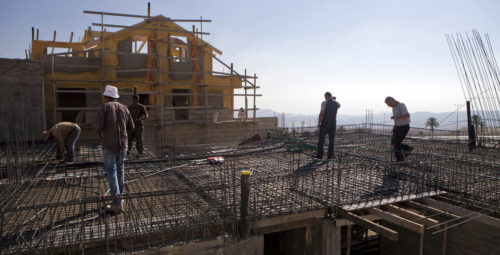 A NEW LUXURY apartment complex under construction in the Ajami neighborhood of Jaffa is only offering homes to Jewish buyers, Channel 10 television reported this week. (ILLUSTRATION: Palestinians laborers work at a construction site in the Jewish West Bank settlement of Maale Adumim, near Jerusalem.)

The “Yopea” project includes 63 housing units with a communal private courtyard, and is located in Ajami, in the southern part of the city.

The alleged discrimination was discovered two weeks ago, when Channel 10 dispatched a Jewish woman, Noa Borenstein-Hadad, to call the project’s sales office, during which she received an immediate invitation to a meeting at the site.

However, when Channel 10’s Arab reporter Sami Abed Alhamid called with an inquiry, he was told that he would not be contacted by the company. When Borenstein-Hadad attended her meeting at the company offices days later, sales staff confirmed that when prospective Arab buyers express an interest in an apartment in the project, they are repeatedly put off until they give up.

“The project is completely Jewish,” a member of the sales team told the reporter.

Ajami, a once-predominantly Arab area of the mixed city, has seen a wave of gentrification and construction that, according to its Arab residents, has priced them out of the market and led to an influx of Jewish home owners.

The Israel Residence Administration, which is advertising the apartments on its website, said in response: “No documents or recordings [regarding these claims] have been passed on to us. However, it is important to note that this is private land and privately organized for buyers from a similar background.”

The website for the project itself has a clock counting down to the end of the sales period. The website says it is responsible for “more than 2,500 units across the country,” and “aims to create quality housing solutions that are both economically and socially obtainable.”

Orthodox Jewish Israelis have in recent years begun to move into Arab areas of mixed cities in an attempt to cement the Jewish presence there.

Activists say that, in recent years, several thousand devout Jews have pushed into rundown Arab areas of Jaffa, Lod, Ramle and Acre, where there is a notable mixed population. Their arrival has threatened to disrupt fragile ethnic relations with the construction of religious seminaries and housing developments marketed exclusively to Jews.

The Israel Land Fund, one of the organizations promoting the policy, helps Jews buy property in both Israel and the West Bank with the goal of “ensuring the land of Israel stays in the hands of Jewish people forever.”

In the Middle of WW2, Jews Were Already Planning the Post-War Holocaust Cash-In
UK Woke Asylum: Jew Has Liberal White Academic Fired for Saying Jews Are Clever
As ISIS Retreats, Cache of Israeli Weapons Found
Moral Particularism and the Imbalance of Nature
Homosexuality as a Weapon
Deliberate Deception
Rabbi: Jews are Not of This World; We're Sent to Conquer It
What is Moral?
Tags:IsraelJewish HypocrisyJewsPalestinians

Israel: Apartment Complex is for Jews Only