Wesley Clark Comes From ‘a Long Line of Rabbis’ 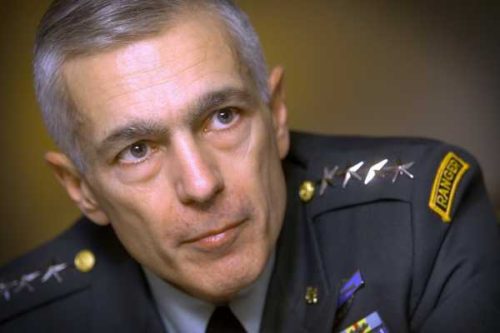 Clark looks White and leader-like, despite his Jewish ancestry, and bridges the totalitarian “liberal” and worship-the-military “conservative” pathologies that now infect America.

RAISED a Southern Baptist who later converted to Roman Catholicism, Gen. Wesley Clark knew just what to say when he strode into a Brooklyn yeshiva in 1999, ostensibly to discuss his leadership of NATO’s victory in Yugoslavia.

“I feel a tremendous amount in common with you,” the uniformed four-star general told the stunned roomful of students.

He told The Jewish Week in New York, which first reported the yeshiva comment in 1999, that his ancestors were not just Jews, but members of the priestly caste of Kohens.

Clark’s Jewish father, Benjamin Kanne, died when he was 4, but he has kept in touch with his father’s family since his 20s, when he rediscovered his Jewish roots. He is close to a first cousin, Barry Kanne, who heads a pager company in Georgia.

He couples liberal domestic views that appeal to much of the Jewish electorate with a soldier’s sympathy for Israel’s struggle against terror. …

Two of Clark’s top advisers are Jews who had prominent roles in the Clinton and Gore campaigns. Eli Segal was a top adviser to President Clinton in his first term; Ron Klain helped run Vice President Al Gore’s 2000 campaign.

Why Is Israeli Spy Jonathan Pollard Back in the News?

Clark has a deep settled hostility against the people of the states. He chooses military despotism and hateful surveillance of the citizenry. A fiendish, fanatic who demands subjugation for what he calls the enemy.

Wesley Clark Comes From ‘a Long Line of Rabbis’