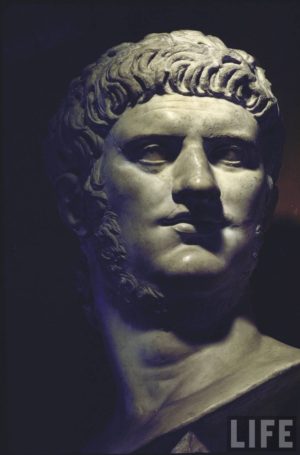 IT IS ALWAYS extremely difficult for a member of one race to understand, or even to appraise fairly, the mentality of another race. I have often commented on a puzzling aspect of the Jewish mind, the strange desinvolture — no, it’s more than that: the downright negligence with which they perpetrate hoaxes that an Aryan would not attempt without spending an hour or two to make sure that his canard was plausible. (I gave some examples in Liberty Bell, November 1984, pp. 8-17.) Consider, for example, a booklet, The True Authorship of the New Testament, written by a Jew who uses the pseudonym Abelard Reuchlin, and published by the Abelard Reuchlin Foundation in Kent, Washington.

Everyone who has even a superficial knowledge of Roman history knows of the conspiracy to overthrow Nero (pictured) that was led by C. Calpurnius Piso, a scion of one of Rome’s greatest families, and included Lucan (M. Annaeus Lucanus), one of Rome’s greatest poets. Nero has always been regarded tenderly by the Jews, because, after he murdered his mother and his first wife, he married one of his mistresses, the aristocratic Poppaea Sabina, who was either a Jewess through some Jewish contamination of her family line, such as is so common in the remnants of the British aristocracy today, or a light-headed and exhibitionistic female, like so many wealthy women who today take up bizarre and exotic religions to nurture their astral souls. (1) Presumably under her influence, Nero showed great favor to the Jews, and that, in Jewish estimation, seems to outweigh actions to which they might object: when a swarm of Jewish Bolsheviks (called Chrestiani, just as their modern successors are called Marxists) confessed to having set the great conflagration that destroyed a large part of Rome, he had them executed with notable cruelty; and when the Jews in Palestine attempted another revolt, he sent a few legions to put them down in a peace-keeping operation that resulted, after his death, in the siege and capture of Jerusalem. They even forgive him for having killed Poppaea Sabina by kicking her in the belly when she was pregnant.

(1. I gave here a commonly accepted story about Poppaea Sabina, which is presupposed in the booklet I am discussing, but I must NOT be thought to guarantee its authenticity. Many historians regard the story about her Judaism as just another Jewish hoax, and I am inclined to agree with them.)

Now the tale imagined by “Abelard Reuchlin” and presented as historical is that under Nero all the Romans were about to recognize the supremacy of the Jew god, Yahweh, and the race he had Chosen to rule the earth, but C. Calpurnius Piso was a very wicked goy, a “Nazi” by anticipation, who conspired against Nero to prevent the world from being blessed by the Jews. When he failed, his vile son carried on his dastardly work by forging the “New Testament” and all the writings of Josephus to slander and defame God’s People.

The story, set forth with elaborate and absurd pseudo-historical argument, is so preposterous it isn’t even funny, and I mention it here only for the name its author chose for his imaginary son of the historical Calpurnius Piso: Arius Calpurnius Piso. He intends us to believe that the son’s praenomen was ‘Arius,’ just as the father’s was Gaius (for which C. is the standard abbreviation).

Now ten minutes in a respectable library would have informed “Abelard Reuchlin” that the Romans used a very limited number of given names, and he could have found a complete list of them in any one of a score of standard reference works, e.g., Egbert’s Introduction to the Study of Latin Inscriptions. The great families of the aristocracy each limited themselves to a very small range of given names for their children, and a reference to the index to Broughton’s Magistrates of the Roman Republic would have shown that the Calpurnii gave to each son one of six praenomina, of which the Calpurnii Pisones used only five: Gaius, Gnaeus, Lucius, Marcus, and Quintus. That a member of the family could have been given the name ‘Arius’ is a fiction so preposterous that is not even ludicrous: it is merely contemptible.

If you and I were to devise some hoax to trap boobies that involved inventing a son for George Washington, we would probably call that son George, Jr., and if we didn’t do that, we certainly wouldn’t imagine a son named Igor Washington or Texas Washington or Sitting Bull Washington or Mohammed Washington. And if we were so ignorant that we thought such a name acceptable, we, being Aryans, would spend a few minutes in a library, discover why such a name was utterly impossible, and revise our fiction to make it at least superficially credible. But Jews never spend the few minutes. I don’t know whether that is because truth to the Jewish mind is whatever is Good for the Jewish People, or because they have such sovereign contempt for a race that has been willing to put faith in tales about virgin births and dead men who sneak out of their tombs after three days, or because they like to show their dominion over their vassals by making the cringing creatures profess to believe fictions that were designedly made preposterous, such as the famous “Holocaust.”

No Place in Hell

No thrashing about in the hereafter
on this one! Straight and to the
point! Definitely builds a fire under
a certain portion of the Jews’
anatomy! Kudos!