Solzhenitsyn: Ahead of His Time 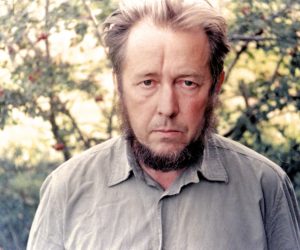 Great writer appealed to leadership on the basis that “you are not alien to your origins, to your fathers, grandfathers, and great-grandfathers, to the expanses of your homeland…”

PROBABLY THE MOST VITAL — and certainly the most numinous — piece of political writing in recent times was Alexander Solzhenitsyn’s Letter to the Soviet Leaders. Published in 1974, it demonstrated that Solzhenitsyn (pictured) was not just another run-of-the-mill Soviet literary martyr, not just a useful and timely hero of the liberal-minority volte-face toward a de-zionized Russia, but an imaginative giant who stood miles above the petty Marxist hacks of his own country and even higher above the pettifogging leftist factions which infest the West and have reduced Western political thinking to the mumbling mummery of the New York Times Op Ed section.

Solzhenitsyn’s principal point is that Russia should abandon the bloody farce of Marxism and become Russian again. Instead of preparing for war with China, which might well destroy both combatants, and perhaps the world as well, Soviet leaders should pull in their horns and concentrate on developing the great empty spaces in Russia’s sprawling northeast. Playing power politics up and down the eastern and western hemispheres was a fatuous game, Solzhenitsyn declared, and recommended a Russia First policy, which included the removal of the Red Army and its political camp followers from the oppressed countries of Eastern Europe.

For his pains, Solzhenitsyn was quickly and efficiently smeared by Western mediacrats — many of whom had been eulogizing him only a few days before the Letter was published — as a “holy fool,” a reactionary, a nationalist, a Christian and a Hitlerphile.

What no one mentioned in the critical avalanche was the manner and tone in which Solzhenitsyn addressed the Soviet hierarchy. Here are his exact words:

I am writing this letter on the supposition that you, too, are swayed by this primary concern, that you are not alien to your origins, to your fathers, grandfathers and great-grandfathers, to the expanses of your homeland; and that you are conscious of your nationality.

It is indisputable that Solzhenitsyn knows as much about Russia as anyone now living in the Western world. He had an important message for the leaders of the country from which he was exiled. And to get his message across he, one of the most intelligent and adroit writers of modern times, appealed to these leaders on the basis of their origins and their feelings of nationality.

Such an appeal would have been totally inappropriate and time-wasting if it had been addressed to the Soviet leadership in the 1920s, 1930s, 1940s or at any time up to the death of Stalin. Towards the end of his life, Stalin may have used Russian nationalism and patriotism to defeat Hitler and destroy his internal enemies. He may, as his daughter Sventlana claimed, have come to think of himself as a Russian. Nevertheless, he was born a Georgian and he died, if not a Georgian, at least a rootless minority ideologue.

Only in these times is it possible for a Solzhenitsyn to appeal to the Soviet leadership on patriotic, nationalistic and Russian grounds because the Marxist ideology of Politburo members has now become a sterile formality, much as Catholicism became a sterile formality in Rome in the days of the Renaissance popes. Marxism was only in the blood of the minority fanatics and minority Russian-haters who have now been cleared out of the Kremlin.

We have little hope that Solzhenitsyn’s Letter will have any significant effect on present Russian policy, either domestic or foreign. Due to the degeneration and etiolation of the West, Russia is now the world’s greatest military power and military power is still the classic measuring rod of success. It takes great character and supreme wisdom for heads of state to abandon a successful policy. It is much easier for the Soviet leadership to ride along on Marxist dogma and Russian imperialism than to shred all the ideological rubbish and start all over again.

Solzhenitsyn has sensed the racial change in the Soviet leadership and has appealed to it on the off chance that the commissars will de-sanctify the unholy trinity of Marx, Engels and Lenin before history does it for them.

Dostoevsky on the Jews
The Unorthodox Path of a Jewish Man in the 'New' Ukraine
Head of Russian Military Gerasimov Predicted Fake Syria Gassing One Month Ago
Russia Hands Over More Katyn Massacre Documents
Solzhenitsyn on Infiltrators in Dissident Groups
The Liberal Dream is Over: ISIS Declares War on Russia and All of Europe
The Unknown Russia
Russia…War or Peace?
Tags:Alexander SolzhenitsynMarxismRussia

The Final Secret of Pearl Harbor

In ’78 while in college I put Solzhenitsyn’s Harvard message to the West up on the college bulletin board with the proviso not to remove it. He began it by quoting Harvard’s motto “Veritas”. It was a surprising, even stunning, repudiation of western liberalism. Having just arrived to the Northeast being been kicked out of the USSR, the supposition was that he would be grateful and laud us for our anti-communism. But his philosophical cast of mind was too adroit and historical to reach the pallid audience that it was met to enlighten. The political science professor quickly removed it. Now Solzhenitsyn’s discourse has proven true. The West has become the expositor of anti-civilization in it’s ridiculous embrace of everything destructive to the development of family values and individual self-control.… Read more »

Solzhenitsyn: Ahead of His Time