Jews Promote Homosexual Marriage in America but Outlaw it in Israel

According to an article in the Times of Israel, the American Jewish Committee (AJC) celebrated the recent Supreme Court ruling extending marriage rights to homosexuals throughout the United States with a Twitter message which read:

“For 109 years AJC has stood for liberty and human rights. Today is a happy day for that proud tradition ?#LoveWins.” It was punctuated with a heart emoticon splashed orange, yellow, green blue and purple — the colors appropriated by the homosexual lobby.

The Times of Israel continued:

The Anti-Defamation League, in its own tweet, left out its age (102) but also got in the hashtag, #LoveWins, and that funny little heart.

Thirteen Jewish groups, among them organizations representing the Reform, Reconstructionist and Conservative streams, were among the 25 joining the amicus brief the ADL filed in Obergefell v. Hodges.

The preeminence of Jewish groups among those backing the litigants was not a surprise. In recent decades, much of the Jewish establishment has embraced gay marriage as a right equivalent to the others it has advocated, including racial equality, religious freedoms and rights for women.

Multiple groups, in their statements, cited the passage in Genesis that states humans were created “in the image of God,” which has for decades been used by Jewish civil rights groups to explain their activism.

“Jewish tradition reminds us that we were all created equally, b’tzelem Elohim, in the ‘image of God’ (Genesis 1:27), and also shows us that marriage is a sacred responsibility, not only between the partners, but also between the couple and the larger community,” the Conservative movement’s Rabbinical Assembly said in a statement.

The Times of Israel added that Jewish groups were also now looking to “next steps in advancing LGBT rights, including in the workplace.” 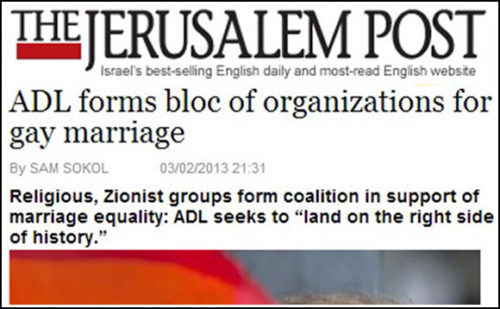 However, in the Jews-only state of Israel, which all these Jewish organizations unconditionally support, homosexual marriage has been specifically outlawed.

As reported in the homosexual activist newspaper, Pink News, “legislation for the option of civil marriage for Israeli citizens who cannot be wed via religious institutions, including same-sex marriage and marriages between members of different faiths, like Muslims and Jews,” has been specifically rejected by the Israeli parliament, or Knesset.

According to Pink News, currently “only a select set of religious institutions, for example the Chief Rabbinate, are sanctioned to authorize marriage in Israel. As a result LGBT and mixed faith couples cannot be legally wed or have an equivalent of civil marriage in the country, or even a weaker concept of partnership.

Furthermore, according to Pink News, “Israel refuses to weigh requests for asylum by LGBT people fleeing persecution, including LGBT Palestinians.”

In other words, Israel, which is the darling of all the Jewish organizations in America, outlaws not only homosexual marriage but even marriage between Jews and non-Jews.

At the same time, Israel-supporting Jewish organizations in America and elsewhere are the biggest promoters of homosexual marriage and interracial marriage (for non-Jews), and have even been credited by Vice President Joe Biden as having “driven gay marriage changes” in the US.

Why would the Jews promote a policy in America and the West, which they themselves outlaw in their own country, Israel?

The only answer must be that the Jewish lobby knows very well that the promotion of homosexual “marriage,” transgenderism, and other mental illnesses are detrimental to the orderly functioning of society.

The promotion of homosexual marriage is part of a deliberate attack upon traditional European culture and normal family life, which has for thousands of years held fast to the notion that marriage is a bond between male and female, the existence or otherwise of homosexuals notwithstanding.

The Jews understand this very well, and this is the reason why they will not allow this attack on family values to take root in Israel — but are determined to see it promoted and propagated in order to further the destruction and dissolution of the European people.

Jewish Group Demands Christian Century Fire James M. Wall
Jews Commit White Genocide as a Hiding Mechanism
What Was Auschwitz Really Like?
Usury Creates Government Oppression; and Where the Jews Should Go
Unrepentant Twice-Convicted Felon To Be Israel’s New Interior Minister
Why Can't We All Just Get Along?
Massive Soros Leaks Expose Jewish Anti-White Agenda
One Million Moms Put in Their Place by Jewish Capitalism
Tags:HomosexualityIsraelJewish HypocrisyJewsJews in America

Jenji Kohan and the Jewish Hyper-Sexualization of Western Culture

The jews are too clever to accept their own hypocrisy.

Though the ancestry of Khazarian Jews of current world was muslim but Obtained from various records that originally they were jews and joined in Islam during the initial period of Islam. Means their original ancestors were deprived by the Roman christians aggression from jerusalem in 70 AD. Further they in 657 AD they relinquished Islam, they considered this incident as their deprivation. So both muslim & christians are their opponents. But christianity mistakenly picked up them as their bosom ally in thirteenth century to confront against muslim, when the then original jews were oppositions of west. So usually muslim christians must need to pay the price.

Jews Promote Homosexual Marriage in America but Outlaw it in Israel