‘After Putin, There Will be Another Putin’ — Jews Again Leaving Russia 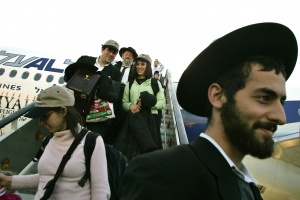 FOR THE first time since the 1990s, the number of Jews emigrating from Russia to Israel has gone up dramatically, doubling between 2013 and 2014 to 4685. But this new wave is different from its predecessors in that its members are younger, better educated, and almost exclusively from Moscow.

Moreover, this new group is convinced that they have no future in Russia because “after Putin, there will be some other Putin,” a dramatic change in expectations compared to how many Jews and others felt in the 1990s when they were pessimistic about Russia in the short term but optimistic in the longer run.

The emigration of Jews from Russia is only a small part of the total number of Russian citizens who are leaving for permanent residence abroad, a figure that is also increasing. In the first nine months of 2014, 203,659 people left, compared to 120,756 who departed during the corresponding period of a year earlier.

Officials of Israel’s absorption ministry view this year as a turning point given that the number of Jews from Russian seeking to obtain Israeli citizenship is two and a half times greater than for any year since the end of the 1990s. And they also see dramatic changes in the composition of this flow.

Ekho Rossii interviewed several of those who have moved to Israel. Their comments say a great deal about broader processes in the Russian Federation. Dramatist Mikhail Kaluzhsky said he had wanted to leave in 1991 but decided against it until finishing his university coursework.

Then on graduation, he said, he delayed going because “all the most interesting” developments where occurring then in Russia. “Why leave?” But “now,” Kaluzhsky said, he had made the decision to leave because the surrounding political, emotional and everyday environment had alienated him and left him with little hope for Russia.

He said that his departure was “directly connected with politics.” First of all, he visited the Maidan in Kyiv and recognized that no such protest was ever likely to happen in Russia. Then the Russian government blocked foreign grants which were critical to the operation of his profession.

Finally, “after Crimea,” he said, his family was driven by “a desire to distance itself” from all this, above all from the [Russian] government.”

Officials in Israel say that those new repatriants “especially from Russia” are taking Israeli citizenship not so much out of a great love for Israel but rather because they are angry or fearful about conditions in the country they had been living in. Such repatriants are on average “younger, healthier, and smarter” than those who came earlier.

At the end of the 1990s, “two thirds of the repatriation were from the periphery, from very small cities. But the current Aliya to judge by the structure of the last three years consists of people from two major cities, Moscow and St. Petersburg.” We observe” Israeli experts say, that the current wave largely consists of the creative intelligentsia.

Vladimir Yakovlev is a representative of this group. The founder of the “Kommersant” publishing house and the “Snob” portal, he arrived in Israel seven months ago; but he said that he feels himself completely at home because “my circle of contacts here almost completely corresponds with what it was in Moscow.”

“We live in one apartment building with friends from Moscow. I meet people on the street whom I constantly met in Moscow… This isn’t a matter of every second person but every first.” Those who are leaving now, he said are doing so because “they are afraid to be where they would like to live.”

According to Yakovlev, the reason so many find they cannot stay in Russia is that “there is no generally accepted and understood system of values” in that country. “This means that there is no common security, no common social guarantees, no striving for culture and education, not even a striving for work. There is none of this.”

As a result of the failure of Russia’s rulers to articulate such a set of values in the 1990s, life in that country has become a kind of “Russian roulette.” Everyday you fear that something you don’t expect will happen to you – and even when it doesn’t, you live with the fear that it will.

That has always been true in Russia, he said, only the methods of repression against the intellectual elite have changed. Stalin shot them. Brezhnev “marginalized them.” Putin “is driving the intellectual elite out of the country.” And many of them are landing in Israeli, which is more than happy to receive them.

Kaluzhsky seconded that view: “Our compatriots in their majority are unfortunately a guarantee that after this Putin there will be another Putin. The level of aggression and force which makes Putin Putin isn’t changing… I am not certain that the situation in Russia will ever change significantly.”

That is why people are leaving. They can imagine that “in Riga, Berlin, Tel Aviv or Montenegro some kind of intensive centers of Russian cultural life will arise, which perhaps will not be important sources of inspiration for hundreds of thousands of people. But for hundreds and thousands, they will be.”

Jenji Kohan and the Jewish Hyper-Sexualization of Western Culture

According to the Harvard Encyclopedia of American Ethnicity, more than 300 thousand Jews immigrated to America from Israel by the early 1970s. How many more have come to America from the ’70s fwd? I fear a significant portion of Jews leaving Russia will feint toward Israel and come to what is left of the so-called U.S.

All you american guys fall into the same trap. Putin is not anti-jew. You must understand one thing. All this jews run away from Russia only because Putin make life in Russia just terrible by genocides russians. All that he make is chaos. Berezovsky, Kissinger, Rockfeller, Ber Lazer (Habad) – is just a few guys who stands behind Putin. https://www.youtube.com/user/Goodfishman/videos I hope somebody knows russian to understand what in this videos. P.S. Alex Jhones in his video sad that in Russia on federal tv channels people talks about conspirancy and World Eleet Agenda. He sad this only because he just don’t understand russian. All this so-called anti-conspirancy videos is just bunch of trash generated by RENtv (tv channel). In short – they put some info about vaccine, reptiloids, India and… Read more »

So, ZZ, Jews are fleeing Russia because of the policies of the Jew, Vladimir Putin? Thanks for clearing that up. There is a lot of confusion out there about the JQ, but one thing is certain: Jews have no business controlling us goyim, whether we live in the U.S. or in Russia. It’s us vs. them. That is the essence of Judaism. Why deny it?

Mr. Putin, being a politician, must act like one and at least give the appearance of representing all segments of Russian population. His interesting biography, here, gives no indication of coming from a Jewish background: http://eng.putin.kremlin.ru/bio

To Will Williams and others. Google search “Putin and jews” – look at the images. Then do the same in russian – “путин и жиды” (copypaste this phrase to google images search box). You don’t even have to go to various russian news sites and actually READ what is going on there (instead of building fantasy castles in your head). It’s all been done for you on stormfront! Putin and his jewish gang https://www.stormfront.org/forum/t966043/ Putin and his oligarchs (almost all jews) https://www.stormfront.org/forum/t926284/ (none of them got punished for any of their crimes. Khodorkovsky – one of 100+ of such jews – was released by putin himself, so that doesn’t count. Putin always says there will be no revision of privatization of the russian people’s property (by the jews), an unprecedented… Read more »

Thank you, Mark. I took your advice and did a Google search on ‘путин и жиды’. Those are some disturbing images of Mr. Putin with Jewish leaders. Some of those images of Vlad Putin wearing a yarmulke, however, are obviously photoshopped. Most are not. I’m not so much a “Putin follower,” as you might think, but I don’t believe he’s a Jew, like ZZ does. Putin is a politician and he must try to please various factions as is the way of politicians seeking a majority of votes of the electorate. I certainly prefer him as a national leader over the clearly anti-White Obama. I like that Putin is so popular with the Russian people and for some of his pro-Russian policies. I accept that he is no Adolf Hitler.… Read more »

‘After Putin, There Will be Another Putin’ — Jews Again Leaving Russia