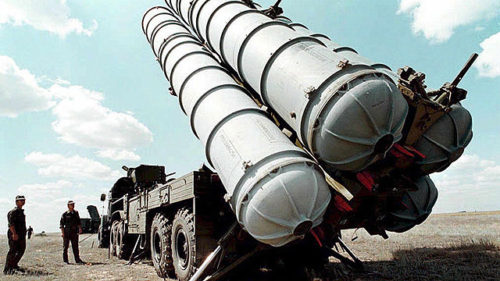 The company’s chief executive, Yan Novikov, confirmed Moscow had removed restrictions on deliveries to Tehran that were imposed under pressure from the West in 2010.

He did not say when the deliveries might go ahead or how close a deal was.

“All restrictions have been lifted by the political authorities. When there is a contract, we will supply the system, including to Iran,” he told a news conference when asked whether Almaz-Antey would supply the missile system to Iran.

President Vladimir Putin signed a decree in April ending the self-imposed ban on selling the S-300 system to Iran.

Prime Minister Benjamin Netanyahu spoke with Putin to convey his displeasure over Russia’s decision to sell the missiles to Iran. Putin for his part told Netanyahu that the missiles had only defensive capabilities and “pose no threat” to Israel.

“Vladimir Putin explained the rationale for the decision in the current context and highlighted the fact that due to their tactical and technical characteristics, S-300 have a purely defensive significance and pose no threat to Israel,” the Kremlin said in a statement.

His decision came after world powers, including Russia, reached an interim deal with Iran on curbing its nuclear program.

Russia hopes to reap economic and trade benefits if a final deal is concluded to build on the framework agreement reached in the Swiss city of Lausanne between Iran and six world powers – Russia, the United States, France, Britain, Germany and China.

Death and Chaos: The Real US/Israeli Goals in the Middle East
Raghead Religion Meets Skypilot Genes
The Media as Judaeo-Distortion Field
Senior Russian Lawmaker Seeks Ban on Windows 10 in State Agencies
Must-Watch Russian Documentary, Banned in The West: The Magnitsky Act -- Behind the Scenes
Julian Assange Ends The Suspense: "The Source Of Hacked Emails Is Not Russia"
America's Creeping War in Syria
Pretexts for an Attack on Iran
Tags:IranRussiaVladimir Putin

I am so confused by the mainstream media…Are there Russian AA missiles in Syria now? Have Israeli jets actually faced them?