DID YOU LISTEN to Jeb Bush make his announcement yesterday? Did you hear loud cheers from a crowd that seemed excited at the prospect that there could be another Bush as President? Was I the only one confused? I don’t know one person who doesn’t threaten to leave the Country if it’s Bush vs Clinton for President again. Can’t imagine folks actually excited and cheering for Jeb.

It got me wondering, would someone like Jeb, or another candidate that’s been struggling like he has, hire a crowd? Pay people to attend their rallies to make them seem like they’re gaining in popularity? We have seen Hillary Clinton stage appearances, knowing ahead of time the people she’d interact with. Would a staged rally be out of the question for a struggling GOP candidate? According to “Crowds On Demand”, not at all.

Crowds on Demand is an American publicity firm. It claims to be the only “rent a crowd” service, providing its clients with the ability to hire actors to pose as fans. I decided to contact them, pretending to be an employee of a GOP candidate running for office. Their Founder/CEO, Adam Swart (pictured), responded. Here is our exchange…

Me: I saw your case study on foreign candidates but has your system proven to work in U.S. politics?

Adam Swart: We have worked with dozens of candidates in the US primarily but not exclusively Republican. Mostly they are candidates who suffer from lack of enthusiasm/turnout at rallies and in need of a ‘game change’ (sorry, that’s a loaded term now!). The candidates have been primarily congressional/senate candidates. We’ve only worked with one (serious) presidential candidate thus far. I have found our approach has led to increased poll numbers and, in many case made the margin of victory for a few reasons:

A) Photo-ops at rallies. Having a diverse group of people (race/gender/age) around the candidate is critical especially for those who are constantly followed by reporters but even for those who only get a couple pieces per day.

C) Gives a sense of legitimacy for the candidate among their existing supporters. When they see lots of enthusiastic folks at rallies, they feel like they’re backing the right horse.

D) Bolsters the candidates’ self-confidence. Some candidates knew about the paid crowds and other times we have been hired by outside organizations. In both cases, seeing more supporters gave them the confidence to up their game on stage.

Me: what reassurances do you offer that the crowd does not leak the fact that they were paid to arrive?

Adam Swart: We have all crowd members sign binding non-disclosure agreements. Our crowd members work for us on a regular basis and understand we value discretion given the sensitive nature of the business. The ‘leak’ issue has only happened on one occasion over the past three years.  (end)

I sent Adam some more questions, but he has not responded. Apparently I’m not very good at this undercover stuff.

Adam didn’t mention which election cycle he was talking about when he said “We’ve only worked with one (serious) presidential candidate thus far”. However, his website was only founded September, 2012. I can’t imagine he was up and running in time to get involved with Romney or Obama before the November election. So one would presume he’s talking about this election cycle. But who?

One clue Adam gave us was when he stressed the word “serious” to describe the Presidential candidate they’ve worked with. We don’t know how he defines “serious” when talking about a candidate, but people who don’t follow politics too closely, might consider Clinton & Bush to be the only “serious” candidates, since they’re talked about most by the media.

Regardless of who it is, the fact that this is apparently effective, is sad. As Adam said “they feel like they’re backing the right horse”. People would rather pick the perceived  winner than the person who’s best for our country.

At the next Jeb rally, someone should see if Barbara was paid by Crowds on Demand. After all, she did say we’ve had enough Bushes in the White House. Why suddenly change your mind?$?$

Judging People Based on Their Political Views 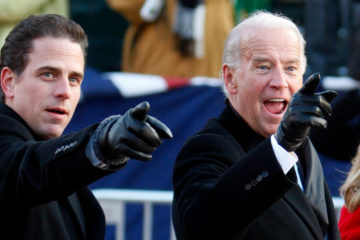 Why Did All of Biden’s Children Marry Jews?