Early man consisted of many competing races, just as today: The old “linear” idea of a single evolving species with no subspecies has been proven wrong again and again.

SEVERAL YEARS AGO, a team of scientists from the Senckenberg Research Institute in Frankfurt, Germany, set out to put a human face to ancient hominid species that once walked the Earth. Using sophisticated forensic methods, they created 27 model heads based on bone fragments, teeth and skulls found across the globe over the last century. The meticulously sculpted heads are the anthropological products of years of excavation in Africa, Asia, and Europe.

In the last 8 million years, at least a dozen human-like species have lived on Earth. As part of the Safari zum Urmenschen exhibition (“Safari of Early Humans”), the facial reconstructions take us on a journey through time, going back seven million years to the species Sahelanthropus tchadensis, and culminating with modern-day Homo sapiens.  Each face tells its own story about the lives of hominids in their respective era, including where they lived, what they ate, and their likely cause of death.

The exhibition drew much controversy when it was first launched, mainly due to scholarly debates that have raged for decades regarding the classification of these ancient species. Fossils are extremely challenging to categorise as one species or another. Only a few thousand fossils of pre-human species have ever been discovered and entire sub-species are sometimes known only from a single jaw or fragmentary skull. Furthermore, like modern-day humans, no two hominids were alike and it is difficult to determine whether variations in skull features represent distinct species or variations within the same species. For example, the recent discovery of a skull in Dmansi in Turkey suggested that a number of contemporary species of early “Homo” — Homo habilis, Homo rudolfensis, Homo ergaster, and Homo erectus — are actually just variations of one species.

Bones can only say so much, and experts are forced to make educated guesses to fill in the gaps in an ancient hominid family tree that extends back 8 million years. With each new discovery, paleoanthropologists have to rewrite the origins of mankind’s ancestors, adding on new branches and tracking when species split, and rather than providing answers regarding our ancient past, many discoveries simply lead to more questions.

Toumai (“hope of life”) is the name given to the remains of a hominid found over a decade ago in the Djurab desert in Chad, Western Africa, belonging to the species known as Sahelanthropus tchadensis. Dating back 6.8 million years, it is one of the oldest hominid specimens ever found.  Sahelanthropus tchadensis had a relatively small cranium. The braincase, being only 320 cm³ to 380 cm³ in volume, is similar to that of existing chimpanzees and is notably less than the average human volume of 1350 cm³.

Australopithecus afarensis, is believed to have lived between 3.9 and 2.9 million years ago and had a brain capacity between 380 and 430 cc. A number of remains of this species have been found in Ethiopia, including the individual modelled above, whose skull and jaw were found among the remains of seventeen others (nine adults, three adolescents and five children) in the Afar Region of Ethiopia in 1975. The most well-known example of an Australopithecus afarensis is “Lucy”, a 3.2 million-year-old nearly complete skeleton found in Hader.

“Mrs Ples” is the popular nickname for the most complete skull of an Australopithecus africanus, unearthed in Sterkfontein, South Africa in 1947.  Although the sex of the fossil is not entirely certain, ‘she’ was a middle-aged individual who lived 2.5 million years ago and had a brain capacity of 485 cc.  Mrs Ples died when she fell into a chalk pit and her remains were preserved when the pit later filled with sediment.  The Australopithecus africanus species, which lived in southern African between 3 and 2 million years ago, has long puzzled scientists because of its massive jaws and teeth, but they now believe the skull design was optimal for cracking nuts and seeds.

Paranthropus aethiopicus is a species of hominid that is believed to have lived between 2.7 and 2.5 million years ago. Very little is known about them because so few remains have been found. The individual depicted has been reconstructed from the skull of a male adult found on the west shore of Lake Turkana in Kenya in 1985. He became known as “Black Skull” due to the dark colouration of the bone caused by high levels of manganese. Black Skull had a cranial capacity of 410 cc, and the shape of his mouth indicates that he had a strong bite and could chew plants.

“Zinj” is the name given to a 1.8 million-year-old skull of the Paranthropus boisei species found in 1959 in the Olduvai Gorge of Tanzania. Named after the original classification of the species, Zinjanthropus boisei, Zinj was the first one to be found belonging to this group of hominids.  Paranthropus boisei lived in Eastern Africa from about 2.3 to 1.2 million years ago. They had a brain volume of about 500 to 550 cc and they would have eaten seeds, plants and roots which were dug up using sticks of bones. Due to the strong jaw that would have also been used for cracking nuts, Zinj is also known as the ‘Nutcracker Man’.

This model is of an adult male of the species Homo rudolfensis, reconstructed from 1.8-million-year-old bone fragments found in Koobi Fora, Kenya, in 1972. He used stone tools and ate meat and plants. Homo rudolfensis lived from 1.9 to 1.7 million years ago and had a larger cranial capacity than his contemporaries, ranging from 530 to 750 cc. They had distinctive features including a flatter, broader face and broader post-canine teeth, with more complex crowns and roots.

Finding “Turkana Boy” was one of the most spectacular discoveries in palaeoanthropology. His reconstruction came from the almost perfectly preserved skeleton found in 1984 at Nariokotome near Lake Turkana in Kenya. It is the most complete early human skeleton ever found. Turkana Boy is believed to have been somewhere between 7 and 15 years of age and lived 1.6 million years ago. According to research, the boy died beside a shallow river delta, where he was covered by alluvial sediments. Homo ergaster lived between 1.8 and 1.3 million years ago and had a cranial capacity of 700 to 900 cc. Remains have been found in Tanzania, Ethiopia, Kenya, and South Africa.

‘Miguelon’ is the name given to the remains of an adult male belonging to the Homo heidelbergensis group, discovered in Sima de los Huesos (“the pit of bones”), Spain, in 1993. More than 5,500 human fossils of this species, which are considered to be the direct ancestor of Neanderthals, have been found in the Sima de los Huesos site. Miguelon, which is the nickname of “Atapuerca 5”, is the most complete skull of a Homo heidelbergensis ever found. Miguelon is a thirty-year-old male who died around 400,000 years ago. His skull showed evidence of 13 separate impacts and he died of septicaemia resulting from broken teeth — a tooth had been broken in half by a strong blow, so that the flesh had been exposed and led to an infectious process that continued until nearly the orbital bone. The model, shown here, does not include the deformity. Homo heidelbergensis lived between 1.3 million and 200,000 years ago. Their cranial volume of 1100 to 1400 cc overlaps the 1350 cc average of modern humans. Fossils of this species have been found in Spain, Italy, France and Greece.

The “Old Man of La Chapelle” was recreated from the skull and jaw of a Homo neanderthalensis male found buried in the limestone bedrock of a small cave near La Chapelle-aux-Saints, in France in 1908. He lived 56,000 years ago and was the first relatively complete skeleton of a Neanderthal ever found. Scientists estimate he was relatively old by the time he died, as bone had re-grown along the gums where he had lost several teeth, perhaps decades before. He lacked so many teeth in fact that it’s possible he needed his food ground down before he was able to eat it. The old man’s skeleton indicates that he also suffered from a number of afflictions, including arthritis, and had numerous broken bones.

Neanderthals are generally classified by palaeontologists as the species Homo neanderthalensis, but some consider them to be a subspecies of Homo sapiens (Homo sapiens neanderthalensis). The first humans with proto-Neanderthal traits are believed to have existed in Europe as early as 600,000 – 350,000 years ago, and they died out around 30,000 years ago. The Neanderthal’s cranial capacity was notably larger than the 1350 cc average for modern humans. However, they also had a larger body size. Recent research now points to the fact that they had the same or similar levels of intelligence as modern humans.

“The hobbit” is the name given to the female remains of hominid species known as Homo floresiensis, found in Liang Bua, Flores, Indonesia, in 2003. Named after her small stature, she was about 1 meter tall (about 3’3″) and lived about 18,000 years ago. Partial skeletons of nine other individuals have now been recovered, and these have been the subject of intense research to determine whether they represent a species distinct from modern humans — it is now believed they do. This hominid is remarkable for its small body and brain (420 cc) and for its survival until relatively recent times (possibly as recently as 12,000 years ago).

Homo sapiens (Latin: “wise man”) is the scientific name for the human species. Anatomically modern humans first appear in the fossil record in Africa about 195,000 years ago. The model depicted above was reconstructed from skull and mandible fragments found in a cave in Israel in 1969. This young female Homo sapien lived between 100,000 and 90,000 years ago. Her bones indicate she was about 20 years old. Her shattered skull was found among the remains of 20 others in a shallow grave.

The facial reconstructions have been turned into an animated video by Dan Petrovic, which depicts the gradual shift in facial features over time. We highly recommend watching this fascinating video.

"We Were Fierce Jewish Women": Pro-Perversion Children's Story Was Created by Jews 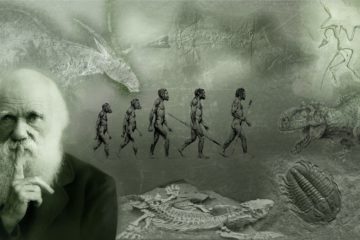