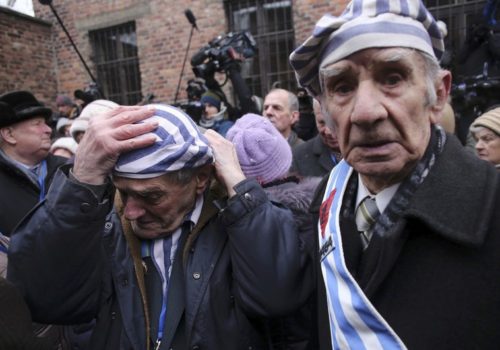 Even though by no stretch of the imagination could Poles — who suffered under Communism for decades as a result of the war — have been at fault; this is one of the smaller of innumerable structured “deals” under which Jews have extracted billions from Switzerland, Germany, Poland, and other White nations.

The regulations that went into effect last month are expected to benefit nearly 20,000 “survivors” worldwide who were not eligible for compensation, The Jewish Week of New York reported Wednesday.

Gideon Taylor, the chairman of operations at the World Jewish Restitution Organization, told the paper that his organization had been negotiating with Poland for six months before arrangements were finalized last week.

The new rules dispense with an earlier requirement for recipients to own a Polish bank account. The change was approved a year ago by the Polish parliament and President Bronisław Komorowski. It took effect last October for residents of the European Union and last month for those in the rest of the world.

Greg Schneider, executive vice president of the Conference on Jewish Material Claims Against Germany, told The Jewish Week that his office is sending out 12,500 applications to those believed eligible worldwide. The forms have been translated into English. The government of Israel is expected to send applications to another 7,000 of its citizens.

The pension program, known as the Legislation on War Veterans and Victims of War and Post-War Oppression, offers the monthly payments to both Jews and non-Jews who were detained by the National Socialists in ghettos and prisons, and to others considered “veterans or victims of oppression.”

Julius Berman, president of the Claims Conference, said in a statement, “The payments can make a real difference helping elderly survivors meet their daily needs and provides them a long-delayed measure of justice.”

Elsewhere in Europe, the Special Envoys for Holocaust Issues and anti-Semitism called on Serbia to return “confiscated property.”

The statement published on May 11 is the first such appeal. The Special Envoys are officials from the Czech Republic, France, Germany, Israel, Macedonia and the United States designated by their governments to deal with Holocaust issues.

Earlier this month, Jewish community representatives from Lithuania met with restitution officials and government officials for the first session of a joint restitution panel.

Memorial Day: Why They Died

This is sad. I know for a fact that Poland does not have all that much money to throw around like this for phony Jewish reparations. I bet Poland cannot even afford to provide social services for actual Polish people, at least not for all of them. There are many Polish people leaving Poland today and going to other countries because there are no jobs in Poland. They are coming to America and probably some other Western European Nations. It’s sad that any Eastern European government would squander its money in such a foolish way.

So, what’s the big deal about this article???

I’ll tell you what the problem is…

Jews are attacking the Europeans overtly, because they can’t help themselves from hating us, they didn’t think about the repercussions of this article.

For those who want a glimpse of what these Jews are calling for, watch the video below.

Forced labor camp survivors will receive compensation for years without pay, non-Ashkenazim will be included. Ten thousand poles should be rounded up and be put into forced labor camps as revenge.

Are you implying that the Germans did not pay the inmates of their camps? There are 150 different types of currency that were used in the camps and which are collected by numismatists. The Germans paid their slave labourers the same wages they paid German Labourers. In contrast,German prisoners after the war were paid a few cents per day.

And every ‘survivor’ is evidence that the evil Germans did not intend to kill that person. There are millions of such survivors.

East Side Johnny
Reply to  Truthweed

So tired of virtually every jew in the west, over a certain age, claiming to be a “holocaust” survivor. And so many of their stories contain delusional acts of bravery by either them or their fellow jews, or accounts of barbarity by the Germans that are simply not believable.

Another implicatrion is that if another war involves Jews they would refuse to live in camps and would prefer to remain in cities with other citizens, being carpet-bombed. The last hoaxoco$tsurvivors will likely be amongst the 3,000 children born in Auschwitz, who all survived because the evil Germans housed, fed, medicated and clothed them – whilst the Germans were being criminally bombed,starved and de-housed.

Poles are Catholics that means inoculated with guilt and the Jesus debt to Jews, plus they still have a stupid chauvinist hate of Germans as shown by that dimwit priest in Canadistan…Pilsudski has no equivalent there now.

Aren’t there any good Polish folk religion or paganism revivalists?

Why shouldn’t any Cosmotheist literature be translated into Polish?

If you’re volunteering to translate our literature into Polish or any other language used by Whites, I think we can come to an agreement.

I hope there are, Elfriede-I reiterate that Poles are Catholics and Christians always cuck to the Juden… I would nothing more than to see a union of Poles Germans and Russians unite but we do not the National-Sozialistsche Napola’s on the spot to embolden that…there are Slav pagan baender and it is for the genii of the NA organisation to make them.