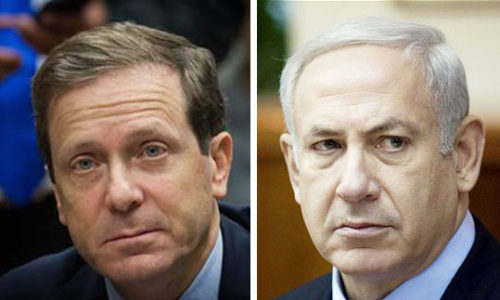 RECENTLY THE American news media have been fixated on the Knesset (parliament) elections in Israel. They have given it news coverage second only to US presidential contests. (ILLUSTRATION: Yitzhak Herzog and Benjamin Netanyahu)

The race was essentially between the Likud party of Benjamin Netanyahu and the Zionist Union of Yitzhak Herzog.

The US press described the contest as “exciting” and “too close to call.” At stake was whether Netanyahu would continue on for another term as prime minister, or whether he would be replaced.

In the event, it turned out that Netanyahu won an easy victory over Herzog, all but ensuring that the he will be able to form a Likud-dominated government.

But does it really matter?

Herzog is portrayed as a genial, reasonable, Arab-hating, Jewish supremacist.

Netanyahu or Herzog: in terms of policy, it is a distinction without a difference. On issues where it matters, such as beating the drums of war with Iran or denying the long-suffering Palestinians their just human rights, Netanyahu’s policies will be indistinguishable from those that Herzog would have enacted if he had been successful.

But image is something else. All in all, it is probably better for the non-Jews of the world that Netanyahu won. His abrasive, disagreeable personality guarantees to maximize anti-Semitism and anti-Israel sentiment. This will be especially true in America, where most people pay more attention to image than to content. Netanyahu is the personification of traditional anti-Semitic caricatures and stereotypes. Having him center-stage in world politics is a good thing.

Swedish MEP: Europe Having Borders is Like the Holocaust

Unfortunately, when this walking “anti-Semitic caricature” speaks to Congress, he gets lots of standing ovations.

You can tell by the Jew’s face that he has a vulgar mind.