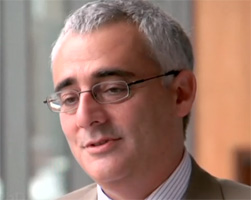 Now we’ve surely heard it all: Even talking with Muslims without making “Jew hatred” the main focus of the discussion proves that you are “anti-Semitic” — even if you’re sending $12 million a day to Israel.

THE AMERICAN failure to highlight Jew-hatred when engaging with entities such as Iran and the Muslim Brotherhood may be defined as “institutional anti-Semitism,” an expert on the topic told The Jerusalem Post. (ILLUSTRATION: Dr. Charles Asher Small, director of the Institute for the Study of Global Anti-Semitism and Policy.)

In Israel to address a conference on far-right radicalism at the Interdisciplinary Center Herzliya on Thursday, Charles Asher Small, director of the Institute for the Study of Global Anti-Semitism and Policy, further expressed the view that American Jews have not engaged with the issue.

Small was careful to explain that while he was far from accusing any members of the current administration of harboring anti-Semitic attitudes, he believed that a sort of functional anti-Semitism exists.

As the US takes part in dialogues with the Muslim Brotherhood and Islamic Republic it fails to bring up the issue of the “genocidal agenda of anti-Semitism” that both bodies have expressed, he said.

“To not deal with anti-Semitism is not only immoral but I would call it, and this is coining a phrase, institutional anti-Semitism.”

Riffing off the term institutional racism coined by Stokely Carmichael and Charles V. Hamilton during the 1960s, Small explained that both concepts relate to a system in which “individuals may not be racist, individuals in this case may not be anti-Semitic, but there is an institutional culture which promotes certain types of behavior. And when an administration is engaging those who want to exterminate Jews, and [by] not engaging this immoral and horrific form of hatred they give oxygen to it and allow it to fester.”

“Can you imagine dealing with the apartheid regime, negotiating with it, and not mentioning racism?” he asked.

Small added that he agreed with a recent assessment by thinker David Hazony, who asserted in an article that the “myth of Israeli centrality” to the world’s problems, a common perception in certain policy and academic circles, is functionally anti-Semitic and that those who believe in it are spreading a modern version of the ancient trope of Jewish complicity in all of the world’s problems even if they themselves are not anti-Semitic.

“In the modern reinvention of the idea, however, it is not the Jewish people but the Jewish state that is the core problem in the world, the key obstacle to betterment. The claim takes different forms and has long been fueled by the propaganda juggernaut of the Arab world. By the time it reaches the softer shoals of places like Foggy Bottom, of course, it goes through a filtration system of bureaucratic qualifiers,” Hazony wrote in a recent issue of the online magazine Tower.

“I think that there are still people in the United States and administration who believe that if it were only for the settlements jihad would dissipate,” Small commented.

“There are people who still hold on to these views and its irrational thinking.”

The above ultimatum summons even a passive fool to reply to this newest fault finding result from the Institute for The Study Of Global Anti-Semitism and Policy. It immediately behoves the same fool to ask , and thus betray anti-Semitic discognition who finances all of these redundant organizations of discontent?! Jewish people are very superior and like to study. If they had to work and toil and face reality more like inferior such as myself perhaps their idle minds would not be so preoccupied with these extravagant thoughts. Some things he says , Asher Small, are typical of transparent extortion and a haughty presumption against most of the natural world, which they demand recreated in their image. Sounds a lot like the Afro-American who attended classes naked at A university… Read more »

“Jewish people are very superior and like to study. “

Where’s the Jewish Thomas Edison, Tesla, Henry Ford, etc., etc., etc.? What great civilizations have these “very superior” (supremacist” people ever built? I can point to several they were instrumental in bringing down, including America this very moment.

Bottom line: claiming antisemitism is the Jew’s only defense. And it’s getting to be a very tired one.

What the USA suffers from most, more than any other thing, is institutionalized Semitism, not anti-Semitism. jews in academia, who can get anything they want deleted from colleges. Because they went out of their way to own all the major text book publishers. jews in entertainment media; jew ideals are routinely presented, and sadly adopted, by Gentile Americans. jews in news media, somewhat ameliorated by the internet. jews in PACs that fund Congressional elections. jews in US gov’t executive branch that look to sabotage any/every Presidential policy they simply don’t like i.e. anything good for the goyim. National Security establishment jews will sell our secrets to Israel who stands ready to shop them to whoever. And of course the lynch pin of Semitism … central banking and financial services. Many… Read more »