EDITOR’S NOTE: The International Business Times recently gave over its pages to a tortured screed from Dr. Efraim Zuroff, who is breathlessly billed as “the chief Nazi-hunter of the Simon Wiesenthal Center and director of its Israel Office.” They go on to say that “His most recent book is ‘Operation Last Chance: One Man’s Quest to Bring Nazi Crimials [sic] to Justice.'”

Dr. Zuroff is highly disturbed by the fact that rising numbers of eastern Europeans hold the “Nazi” beliefs that nations should belong to their native inhabitants. Even style alarms him: style of dress, of symbology, or of celebrations (such as torchlight parades) all seem to raise the spectre of “hate” in Zuroff’s eyes. (ILLUSTRATION: Far-right nationalist march through the streets of Tallinn, Estonia)

The torchlight parade held by right-wing ultranationalists last week in the Estonian capital of Tallinn reminded the Russian journalists covering the event of similar spectacles in Nazi Germany, but this was more wishful thinking on their part than actual reality.

They were out in full force this past Tuesday night (February 24), but unfortunately, they were the only foreign television journalists covering the event, with not a single representative of any European Union member country’s media in attendance.

That is what is happening these days in Eastern Europe. The slightest hint of neo-fascism, racism, anti-Semitism or xenophobia in a post-Communist country will bring out a horde of Russian journalists eager to provide proof that the former republics of the Soviet Union are already on their way to a Nazi revival, or some equivalent, which would add a lot of grist to Mr. Putin’s propaganda machine, and ostensibly justify a unilateral re-annexation a la Crimea.

The European Union, on the other hand, does not appear to be particularly perturbed by genuinely disturbing phenomena in the Baltic countries and elsewhere, which, of course, would in no way justify Russian aggression, but deserve to be handled seriously and promptly before they get out of hand.

Tuesday’s march, which was sponsored by the Sinine Aratus (Blue Awakening) youth movement, closely affiliated with the Estonian Conservative People’s Party (EKRE), was a good example of at least one of the major problems we increasingly encounter in post-Communist Eastern Europe, and especially in the Baltics. I am referring to the rise of ethnocentric sentiment, a euphemism for racism, anti-Semitism, and xenophobia.

Thus the march was publicised under the slogan of ‘Estonia for Estonians,’ an explicit message of zero tolerance for Estonia’s minorities, among them families who have lived in the country for generations. The announcement also bore the symbols of the “sister” parties in Lithuania and in Latvia, whose platforms advocate the same ethnocentricity.

In addition, the only sign I saw besides the one held by the lead marchers which said ‘For Estonia,’ bore a white supremacy message. In fact, IBTimes UK reported not that long ago on a statement by Martin Helme, a leading member of the EKRE, who said that the policy in Estonia towards Africans should be, “If you’re black, go back.” When questioned about this statement by the Estonian daily Postimees, Helme responded that he would not allow political correctness to silence his opinions.

… The other omnipresent problem in the Baltics was not in evidence this past Tuesday night, but is definitely in the background.

As past marches by Baltic ultranationalists have clearly demonstrated, one of their key goals is to rewrite the narrative of World War II and the Holocaust to hide the extensive lethal complicity of local Nazi collaborators and promote the canard of historical equivalency between Communist and Nazi crimes, often commonly referred to as the “double genocide theory.”

A very important element of this campaign is the glorification of certain anti-Communists, despite their participation in the persecution and murder of their fellow Jewish citizens during the Holocaust.

This element was on display last week in Kaunas, Lithuania and will certainly be featured in Vilnius and Riga in the marches scheduled for mid-March. In Estonia, this revisionism is on display at the annual gathering of SS veterans held in Sinimae every summer, and hosted by the veterans of the 20th Estonian Waffen-SS Grenadier Division, which is attended by SS veterans from many European countries in which such gatherings are illegal.

It is not hard to understand why Estonia, the second smallest of the EU member countries, with a population of only about 1.3 million, a significant percentage of whom are Russian, should seek to safeguard its heritage and culture, but Tuesday’s march and the ideology behind it are the worst way possible to solve these problems.

In Estonia, a country in which local Nazi collaborators participated in the murder of practically every single one of the 1,000 Estonian Jews who lived there under the Nazi occupation, as well as of thousands of foreign Jews deported by the Nazis to Estonia, and local Jews killed by the 36th Estonian Security battalion unit in Nowogrudok, Belarus, they should know better. 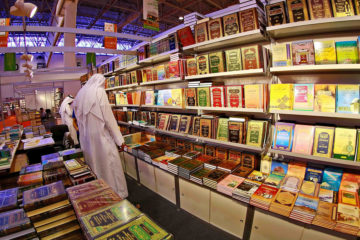 Not Only in the West: Jews Also Demand Censorship of Books in the Arab World

If a Jew is “alarmed” then something good is happening. It’s amazing how Jews have contempt for nationalism–except in Israel, that HYPER-NATIONALIST, HYPER-ETHNOCENTRIC Jewish “Nazi”-like state.

‘Operation Last Chance: One Man’s Quest to Bring Nazi Crimials [sic] to Justice.’” So-called “Nazi crimials?” Anyone who stands up to Jewry, Jewish communism, Jewish international bankers, cultural Marxism, etc., etc., etc., is a HERO! The real criminals, the real villains are those Jewish international bankers who bankrolled the Jewish-led overthrow of the Czar of Russia in 1917 (and shortly thereafter had him and his entire family murdered by Jewish thugs) and imposed upon Russians and other Eastern European and Asian people the blood-drenched communist (a Jewish ideology) mega-tyranny that claimed the lives of over sixty-million people (that ten times as many as claimed by the fake Jewish holocaust propaganda). When you add the tens of millions murdered in China and other countries in the Far East, Africa, etc. that… Read more »