If Germany Had Won the War: Planetary Colonies by 2015? 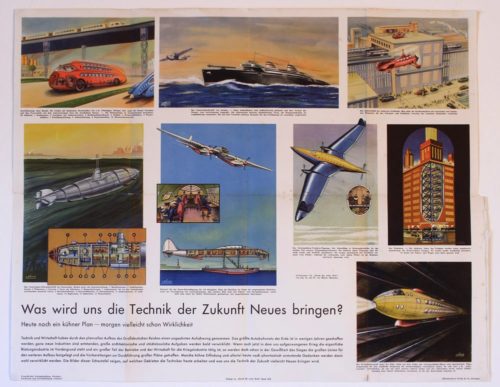 Images released by Martin Kappler, showing a German artist’s imaginative vision; for us, today, the lost future of a fast receding past…

(ILLUSTRATION: Martin Kappler has scanned and uploaded a German poster from 1941 which shows Third Reich images of the paleo-future. The poster was in a book called Durch die weite Welt vol. XIX, one in a series of books for boys.)

THESE IMAGES and reflections were forged at the height of the war, though Germany had already been, and remained, at the cutting edge of technological advancement. However, the National-Socialist worldview stressed technological improvement not only for its own sake, but for weal and wellbeing of the people and the nation. This meant, among many other things, conserving and respecting the soil and the land, responsibly tending forests, and safeguarding the welfare of animals. It is not difficult to conceive that, absent that pointless war, Germany would have made powerful contributions to man’s progress, and that we would already be visiting, if not colonizing, other worlds. This forgotten future is yet one more tragedy on an ever-growing list of tragedies.

Technology and economy in the Greater German Reich have gone into an unexpected upswing. The largest network of Autobahn highways has been constructed in just a few years, whole new industries were created and great architectural and urbanistic tasks are about to be realised. Although the war, that was forced upon us, makes it necessary to concentrate our economy on the war efforts, the great plans for the buildup are drawn with the certitude of our victory in mind. Many keen inventions and many thoughts that still seem fantastic today will then be realised. The pictures in this poster show on which branches the engineers are working today and what the technology of tomorrow will bring.

Our future lost…but yet still may be reclaimed. The Jew has got to go from among us…no polite way to say this…
but after examining the historical record, I see no reasonable alternative except that.

If Germany Had Won the War: Planetary Colonies by 2015?