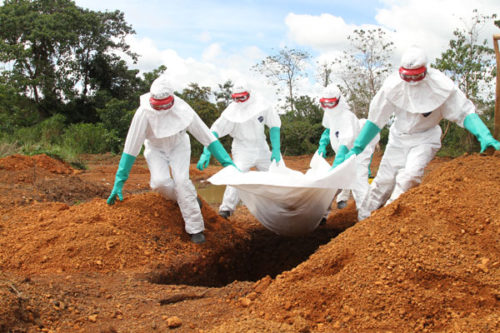 MOBS OF African tribesmen have attacked and destroyed hundreds of International Red Cross-staffed and funded Ebola clinics in central Guinea, as part of a renewed outbreak of superstition-driven anti-white conspiracy theories on that continent which claim that white people are responsible for the disease.

According to the Red Cross, their facilities in Guinea have been attacked on average ten times a month over the past year.

During the latest incident, which happened last week in the town of Faranah, tribesmen attacked an Ebola transit center and set ablaze a vehicle belonging to medical charity Medecins Sans Frontieres. A Red Cross burial team was also targeted and forced to flee.

In the capital of Guinea, two Red Cross volunteers were beaten while trying to conduct a safe burial, the charity said. Ending “traditional” burials is seen as crucial to stopping the spread of the latest outbreak, which has killed unknown thousands of Africans because rituals often involve extensive contact with highly contagious corpses.

Officials say that locals especially around the capital Conakry continue to hide sick friends and relatives from authorities.

The well-known African tendency toward superstition has been increased by the appearance of the disease — caused by unhygienic conditions and the habit of eating infected “bush meat” — and the belief is widespread that whites are to blame for Ebola.

While much of the anti-white conspiracies are spread by word of mouth, the irrational hatred has made at least two appearances on the shaky internet in Africa.

The first such example was a post by an African in Ghana, one Nana Kwame, titled “Ebola is not real and the only people who have gotten sick are those who got shots from the Red Cross.”

Kwame’s original post was republished by an obscure news site called the Event Chronicle and went viral from there. In the article, Kwame claimed that the deadly virus is just an invention and “Ebola it is only contracted by those who receive treatments and injections from the Red Cross.”

“[T]he APPEARANCE of this Ebola “pandemic” (should Americans not catch on) will be used to scare the countless millions into taking an “Ebola vaccine” which in reality is the pandemic,” Kwame continued.

“Already they have started with stories of how it has been brought to the US and has appeared in Dallas, how white doctors were cured but black infected are not being allowed to be treated, etc.

“ALL that will do is make blacks STRIVE to get the vaccine, because it appears that the ‘cure’ is being held back from blacks. They will run out in droves to get it and then there will be serious problems.

“Ask yourself: If Ebola really was spread from person to person, instead of controlled spread through vaccination — then WHY would the CDC and the US Government continue to allow flights in and out of these countries with absolutely no regulation, Or At All?”

While Kwame’s post was clearly ignorant and contorted — to say the least — it is an accurate reflection of what many Africans believe, as evidenced by the attacks on the Red Cross facilities across West Africa.

The posting claimed that Europe and America “hate Africans and worship an Ebola demoness who they call ‘Ebola-Chan’. They perform magical rituals in order to spread the disease and kill people. They target the area they want to infect next using blood sacrifices.

“Apparently even some Ebola doctors are part of the cult and instead of treating the disease are deliberately spreading it.”

Below the post, someone wrote: “A disease can easily gain powers if these white people in Europe are actually doing blood sacrifice. May God help us fight this CIA created demon.”

Another user said: “If they commit such atrocities as shown above, we can’t blindly send every hard working African into their clinics and hands. What if we’re sending our people to their deaths in these clinics?”

A third person claimed white men are spreading the virus because “[they] want our blood and organs because they have weak bodies.”

While much of this appears comical to Western observers, it is taken as real by many in sub-Saharan Africa, where the average IQ varies between 59 and 74.

According to a report by AFP, for example, last September eight members of an outreach team in the southeastern town of Womey were killed by protesters who denied the existence of Ebola and denounced a “white conspiracy.”

In a further sign of the hysteria surrounding Ebola, panic spread through schools in the capital Conakry on Wednesday over false rumors that a Red Cross team was coming to take away infected students.

Schools in the central Kaloum neighborhood emptied as parents arrived to collect their children, with many students crying and calling for help, according to an AFP correspondent at the scene.

“The rumor is that a team of the Red Cross are coming to our school to find an Ebola patient — that’s why all the children ran out,” a teacher told AFP.

The panic followed similar incidents in other parts of the capital on Tuesday, witnesses told AFP.

There is a widespread misapprehension among Guinean students and parents that humanitarian workers who spray schools with disinfectant are deliberately spreading the virus.

“We were in class around midday. Our parents forced the gates to the playground to come and pick us up because they learned that the Red Cross was coming to spray the schools,” said a primary school student.

Non-White Invasion of Italy: African Migrants Have Seized 100 Buildings in Rome
Want Honesty About Africa? Look to Japan
Random Flesh Eating
Morality and Abstract Thinking
The Consequences of Comfort
The White Race Does Not Deserve to Survive (White Version)
Buried Beneath the Rubbish
The Radicalizing of an American
Tags:AfricaAfricansEbolaGuineaSavage AfricaWhite Americans

New Insights into Origins of the World's Languages

White people have a long history of inciting riots and causing trouble in developing countries. So Whites must be complicit with Ebola insurrection. As a White man of Dixieland, we certainly don’t like strangers on the Potomac who are seemingly cultureless tell us how to live. People should sweep around their own doorstep. A healthy Black Africa should be managed by the eternal laws of nature.

Let these sub-human apes DIE!! Care about your own ONLY!