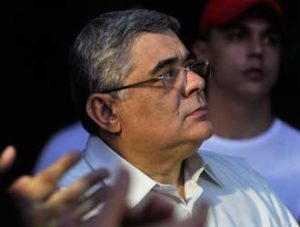 In fear of the Golden Dawn

AS YOU ALL know, every member of parliament from Golden Dawn, elected in June 2012, has been indicted. Remember that the Minister of Justice from Samaras’ government, Athanasiou, from the first moment of our arrest, had stated that we will have a fair trial. It seems that in addition to being a Minister, he was also a prophet — especially considering that, according to the council of appeals that issued the indictment, we should have been exempted under the law and never brought to trial.

But they have said that we will have a fair trial. We hope so, we want this and we seek it — to show the truth and to bring to light all inconsistencies and the criminalized political life of our nation which has led to an unprecedented prosecution of the third largest party in the country. We hope that it will be a trial and not a “tele-trial,” like those we have seen for a whole year in the media channels controlled by the conspiracy.

The Golden Dawn, despite this unprecedented prosecution, continues its fight for a new Greece of Freedom and Justice. This fight is being successfully conducted, despite great adversities, by thousands of Golden Dawn fighters. And so, because of these fighters, in the recent elections — fighting the whole existing system, fighting even from prison — we managed to achieve third place, and are the third largest party in Greece. The pseudo-democrats didn’t respect that, for whom — supposedly — the “will of the people” is paramount. They follow the same policy of the totalitarian exclusion, of our complete condemnation. They do not even respect the presumption of innocence. They have condemned us even before we have been judged.

Amidst all this was the tour of Varoufakis in Europe. His last meeting was with the German Finance Minister. During this interview, Varoufakis didn’t miss a chance to refer to the Golden Dawn — a reference for which there was no reason, in our opinion. In short, he said that Germans should facilitate the economic plans of SYRIZA, because, if they do not, we all must fear the rise of Golden Dawn. To prevent the rise of Golden Dawn!

Specifically, SYRIZA’s Minister said: “I believe that the German nation is the one nation that can understand us better than anyone else in Europe. No one understands better than the people of this land how a severely depressed economy, combined with a ritual national humiliation, can hatch the serpent’s egg within its society. When I return home tonight, I will find myself in a Parliament, in which the third-largest party is not a neo-Nazi party, it is a Nazi party.”

That’s what Varoufakis said to Schäuble, denying us the right of self-determination: ever since 1992 we have declared ourselves nationalist Greeks, not “neo-Nazi” or “Nazis.”

But he didn’t tell us why there is an economic crisis: Why has the financial system of Greece collapsed? Why is our country at the mercy of the international loan sharks? Of course, this is not Golden Dawn’s fault, because Golden Dawn didn’t govern while those debts were being made, and furthermore our party promotes pure economics in every way and would never have made such deals. Those who led our Homeland into today’s poverty are those of PASOK, ND and our great “partners” within the European Union, among whom Germany is in a prominent place, and whose big companies are burdened with scandals in our Homeland.

But the question remains: Varoufakis in the meeting with Schäuble, said, in effect: “Help us — otherwise we are in danger of Golden Dawn.” Why should they fear the Golden Dawn? I wonder if what they are they afraid of is the fact that they have decided to make a disorderly retreat from their electoral pledges? That the termination of the [debt/austerity] Memorandum, which they

Are they afraid of the Greek people who elected them as the first party, provided that they would change our lives, and that they, first of all, would terminate the Memorandum? Everything indicates that SYRIZA is not going to keep its promises.

From our side, we wish from the bottom of our heart to achieve Greek economic recovery — and to terminate the Memorandum. But we do not see any signs of this happening, up to now at least. Instead, the new Greek leaders seem to have forgotten the debt cancellation — and they talk about “bonds without expiry date,” — i.e. to make the country an eternal hostage to the foreign lenders. ND continues the same disastrous policy. In fact, ND would not be displeased at all if SYRIZA fails, if our country is bankrupted and the Greeks are dragged into poverty. They put their party’s vindication above the interests of our Homeland. We do not think in this way and we insist on honoring our pre-election announcements.

Also, SYRIZA’s argument that if the pre-election promises are applied the country “will be destroyed” cannot stand. And finally, the people have a part to play. With the elections they took responsibility for change, for conflict with the lenders, for the audit of the debt — to finally know who has stolen our wealth, who has abused these huge sums and led our Homeland into the current situation. Golden Dawn insists on its positions, which we have maintained from the beginning: Full and complete repudiation of the Memorandum; and abolition of all concessions of national sovereignty, and the restoration of Greece as an independent state. We want a national state — and this will not change for anything.

Golden Dawn has taken a consistent position on all national issues. Golden Dawn believes that if SYRIZA’s government seeks a truly patriotic policy, then SYRIZA should denounce to the UN the casus belli of Turkey and put an end to all threats to our national sovereignty.

Golden Dawn also believes that a big problem — that burdens our Homeland nationally, socially and economically — is the problem of illegal immigrants. And at this point, of course, SYRIZA is not only incapable of facing this problem, but in fact extremely dangerous in making it even worse.

A Race-Based Argument
European-Americans Need A Caucus
The Jewish Influence on Religion
Yet Another Multi-Decade Sex Grooming Scandal in the U.K. -- What Exactly Did Britain "Win" from Wor...
Greece: Non-White Invaders Set Fire to EU Offices
102,387 Migrants Land in Europe in First Six Months, Says IOM
Austria: "Like It or Lump It" -- Invaders to Be Given €1-an-Hour Jobs Until They Learn to Speak Germ...
The Great Divide
Tags:EconomicsEuropeGolden DawnGreeceImmigrationJustice systemMediaNationNationalismNationalityPolitics

Russia Creates Its Own Payment System

William Pierce: How to Improve Our Souls