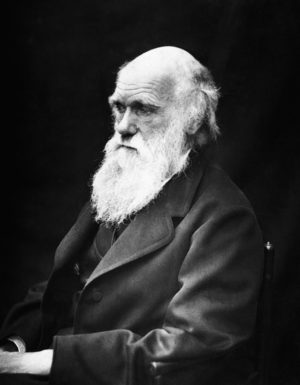 SINCE THE “Who We Are” series began appearing in NV, the National Office has been receiving complaints from subscribers who are unhappy because the account of man’s origins given there doesn’t jibe with the Jewish account in the Book of Genesis. (ILLUSTRATION: Charles Darwin)

Some readers have sent curt notes, such as, “You evidently don’t believe in the Bible. Don’t you know that evolution is the work of Satan? Cancel my subscription immediately!”

Others have been more patient, explaining either that (a) the first White people were placed on earth via flying saucer somewhere around 7,000 years ago, or that (b) the Creation occurred as described in Genesis, but Adam and Eve were Whites, not Jews, and that the people of the Old Testament eventually migrated to northern Europe and were the ancestors of the European race.

Complaints were definitely in the minority, with most readers indicating an approval of the race-history article, but there was no intention of offending any of our readers’ religious sensibilities with the “Who We Are” series. On the other hand, the Alliance never hesitates to print the truth — even when the truth conflicts with cherished myths. The racial history and prehistory in “Who We Are” are in accord with the presently known facts, whereas the account in the Old Testament and subsequent migrations form Eden to Scandinavia are not.

But the objections to presenting the facts of biological evolution, and our insistence on doing so, go deeper than a quibble over Jewish mythology. Evolution is not just a scientific concept which helps us understand race history; it is an idea which is absolutely fundamental to our whole way of thinking. The doctrine of the Alliance is based solidly on the evolutionary concept.

Throughout recorded history the prevailing idea of the world has been a static idea. The world existed. People were born; they grew old; they died. The seasons changed. But year after year, the world remained essentially the same. The stars always returned each year to their same places in the sky. There were always the same animals, the same types of weather, the same cycles. The world did not change. So it had always been, and so it would always be. That was the central fact of life.

For the last thousand years in Europe, in particular, there has been a static view of the creative process. The Christian religion, just like the Jewish and Moslem religions, regards the creation of the world, not as an ongoing process, but as something completed. Both the material and the spiritual worlds were finished long ago. In particular, God is finished, already a perfect being — hence, incapable of improvement or change. And man, of course, has also been viewed as an unchanging creature, with a fixed relationship to the unchanging Creator.

A century ago Charles Darwin shattered forever this static view of the world — although many people didn’t realize it at the time, and many apparently still don’t. Darwin, of course, was not the first man to see the world as an evolving reality rather than as a static reality. And his work was flawed in several respects: He made some errors, and he failed to understand the mechanics of evolution. (The explanation of that — at least, as far as biological evolution is concerned — we owe to Johann Mendel and his successors in the fields of genetics.) Nevertheless, Darwin did overturn the old, static worldview, and he replaced it with the evolutionary view. That is the greatest revolution in human thought which has ever taken place.

Life, of course, goes on, more or less, as before. People are born; they grow old; they die — but now we see each generation as slightly different from that which preceded it. The seasons still follow the familiar cycle — but now we know that the average climate also changes slightly from year to year, carrying the earth into a new and different climatic epoch. Even the stars do not return to exactly their same spaces in the sky each year; the whole pattern of the heavens is shifting, changing into something altogether new and different. The universe is evolving.

Because the pace of Cosmic evolution is slow, compared to the pace of human life, we are able, as mentioned, to go on more or less as before. But our vision, our understanding, is now altogether different. We no longer see ourselves or the world around us as a finished product. We no longer see the process of creation as something which ended long ago, or the universe as complete and static, ruled by a being with perfect knowledge.

We see instead a dynamic, evolving Whole, of which we are parts. We see an uncompleted world. We see a universe, a Cosmos, which is perfect neither materially nor spiritually, but each is striving toward perfection, toward perfect knowledge, toward perfect consciousness.

This is an exciting vision, vastly more exciting that the old view of the world, but it is a vision which makes conservatives uncomfortable. They don’t want excitement; they want the feeling of security which comes from a sense of permanence. They want to be comfortable and safe and sure.

That is a view which gives the conservative vertigo. To be sure, even we cannot see the whole path which lies ahead of us. Beyond a few hundred years it becomes lost in the clouds of uncertainty which lie ahead of us and above us. But we know it is there, and we form our plans, choose our values and our goals accordingly. The conservative, instead, fixes his gaze on that portion of the path immediately under his feet and tells himself that that’s all there is. And he makes his plans and chooses his values and goals accordingly. And they are, of course, different from ours.

An understanding of the evolutionary nature of reality makes us radicals. We see that tendencies — which may be deeply buried beneath surface appearances now — can, nevertheless, have profound effects on the way things develop in the long run. In evils which may seem small and tolerable to the conservative we recognize the potential for great damage, if their effects are allowed to accumulate long enough.

The conservative would like to patch things up superficially, to alleviate the immediate and obvious symptoms of the social and political and racial problems around him. With a static view of the world, he believes that things swept under the carpet will stay under the carpet.

We, with our evolutionary view of the world, know that treating the symptoms of a disease is not enough. We know that the world is dynamic, and that the causes of a disease will continue festering under the surface until we go after its roots and tear them up.

That is why the conservative, for example, has always been willing to settle for racial segregation as a goal, while we have not. More generally, it is why the conservative turns away from difficult questions with harsh and unpleasant answers; he does not see the necessity of doing unpleasant things now in order that life may be on a higher plane in the future. It is why even the racially conscious conservative finds it so difficult to make sacrifices. He sees only the men and women around him, with all their imperfections, and he says to himself, “I should sacrifice myself for them?”

Iceland to Build First Temple to Norse Gods Since Viking Age
Arman Talks About Whiteness
Let Nature Decide
Attack of the Conservatives
Communism is Neo-Christianity
The Reality of Human Group Competition
White Voodoo
What is Right and What is Wrong
Tags:Charles DarwinConservatismConservativesCosmic evolutionEvolutionRaceReligion

Miscegenation: The Morality of Death

An Introduction to Sir Arthur Keith

I am a National-Socialist, but I am also an orthodox calvinist and it seems that the critique of the Genesis account as “Jewish” lends itself to a degree of theological ignorance (since racial identity has been historically understood as a biblical teacing). Likewise, the insistence on Darwinism lends itself to historical ignorance since the two most influential far-right thinkers were either anti-darwinist or openly non-darwinists (Spengler and Yockey). The Theory that races were distinct and to remain separate and that certain races had natural superiority is a concept that was justified by the use of scripture for centuries prior to Darwin ever lifting his pen to blaspheme God Almighty. R.L. Dabney, the prominent reformed theologian and Confederate chaplain defended slavery not by a theory of evolution, but based on the… Read more »

In response to your saying that Darwinism has roots with the Marxists, I disagree. That is an absurd statement: https://nationalvanguard.org/2015/03/marx-darwin-and-the-scientific-ideology/ Also, Adolf Hitler was not very fond of Christianity himself. He did not know what to do to deal with his constantly battling Protestant churches in Germany either. As quoted from David Irving’s The War Path: “He believed in what he usually referred to as “Providence,” to which he attributed the same mystic powers of explaining the inexplicable as Christians do to God.” “In 1939, Hitler regarded the Church as a vast and impersonal corporation of unscrupulous methods, drawing colossal state subsidies at the same time as it viciously attacked the state and strove to divide the people that Hitler had spent six years trying to unite.” “As for the… Read more »

Rosemary, I do agree, and Ben Klassen had it right:
http://whitebiocentrism.com/viewtopic.php?f=26&t=395

Also, Christianity and Communism are Jewish Twins,
as these both do come from the exact same sources:
http://whitebiocentrism.com/viewtopic.php?f=26&t=1963