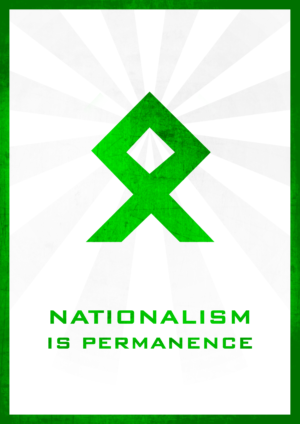 LET US AGREE, without rancor, that European Jewry was predisposed to take superior advantage of industrial capitalism as it emerged from European feudalism. A disproportionate number of Jews were engaged in town commerce during the feudal period; and their ethnocentrism is prominent in relation to that of other races. Europeans have not capitalized on international finance in proportion to their contributions in science and industry because they came late to the monetary aspects of commerce, and have comparatively little ethnic cohesion.

Shrewdness in matters of money, together with a highly-developed sense of group self-interest, have given Jews possession of European societies’ cognitive apparatus. They embody the ‘nervous system’ of our body politic, and we are made neurotic by the infection of alien culture. Our lives are directed by signals they generate. These signals arrive principally through entertainment, educational, and monetary channels – the last of these being critical to control of the first two. We incur debt to pay for pastimes that debase us and for information that deludes us.

The Jew has put his money where his tribal interests lie; and this need not be a reproach, for he is only being true to himself and to his own. It is sufficient to observe that his interests are not our interests; and we ultimately have the power to generate cultural signals that will elevate us above the mere material satisfactions proffered by our global elites, and to see our history through our own eyes.

We are told that the Twentieth Century’s wars were essential to preserve liberty against tyranny. They were not. World War I was fought to launch a global materialist order called communism. This war so weakened national regimes that they could not resist immersion in another global materialist order called capitalism. International finance was thereby liberated to develop arbitrary and unsustainable patterns of monetary placement that soon crashed the global economic system.

International capitalism is inherently unstable. It demands access to resources and promotes markets without respect to national sovereignty. The racially detached globalist thinks nothing of preying on coherent populations to the point where their societal order dissolves, and economic activity (at least at a scale required for civility) then becomes impossible.

The nations which became the Axis powers isolated themselves from a degenerate world economy in order to create national economic spheres in which their people might prosper. For this they were punished severely, and forced back into the international materialist syndicate that is now poised for another collapse. Liberty and tyranny were not the antagonists in World War II. The combatants were the combined forces of international materialism (capitalism with communism) on one side versus the nationalist forms of economic order on the other.

We are also told that the social order of industrial nations will collapse unless capital markets are left free to discover the unique optimum implicit in our economic potential. This is true insofar as any dynamic system must always be seeking a uniquely desirable state in order to remain stable. But further assertions that the economic optimum cannot be computed by artificial intelligence constitute an academic fraud – probably the most sinister, long-standing, and savagely defended piece of bunkum since Ptolemaic astronomy.

Clicking over to www.sfecon.com, one sees a succession of all the physical and financial flows, together with the associated prices, by which a general mathematical description of the economy proceeds efficiently from chaos to optimality. Though such demonstrata have been available for decades [1] and have been reviewed favorably in disciplines adjacent to economics [2] the economics profession will demolish anyone attempting to bring them forward. Sources of economic order must, you see, remain a sacred mystery or some sort of ‘miracle’ that can only be appealed-to through the agency of a priestly class.

An efficient, calculable path from economic chaos to economic optimality is subversive in that artificial economic calculation would strengthen nation/states in their resistance to globalist financial tyranny. Solving the computation problem would bring the efficiency of pure buccaneer capitalism (which, truth be told, exists only in the abstract) to regimes of economic command. Economic command is natural and proper to ethnically coherent states: National Socialism can express the goodwill that is spontaneously generated within a self-conscious ethnos; and that goodwill is preserved when a society’s material substrate is managed in a beneficial, transparent, and scientific way.

Economics’ finding that its calculation problem is complex beyond any possibility of solution underlies the ‘science’ of economics as we have it – which, being a Jewish preserve, essentially continues Talmudism but without God. The impossibility of economic calculation originated the atheistic Jew Ludwig von Mises [3] and its most ferocious living exponent is another atheistic Jew, Professor Walter E. Block of Loyola University New Orleans [4]. (Block openly favors reconvening the Nuremberg trials to deal with his ideological opponents [5].)

Though the economic calculation problem is abstruse to a point where only specialists can even state it, its indissolubility is regularly proclaimed through mainstream Neo-conservative and Libertarian media channels. Jonah Goldberg [6] Kevin Williamson [7] Thomas Sowell [8] and Walter Williams [9] have lately been the most insistent popularizers of economic non-computability (in continuation of the Jewish practice of projecting their initiatives through the agency of pliable negroes).

The solved calculation problem at sfecon.com completes a line of development that began with Carl Menger [10] advanced to Vilfredo Pareto [11] and then to Friedrich Hayek [12]. (Their works are now cited to induce almost the exact opposite impressions of what they convey literally.) Noting that SFEcon’s author and his predecessors are all men of European ethnicity [13] we place their achievement within the specifically Western scientific tradition, and in contrast to the Semitic.

Western economics issues from an objectively solved problem that has real benefits to offer – especially elimination of the cycles of boom and bust, reflected in cycles of war and peace, that have plagued Russia, Europe, and the Anglosphere since the mid-Seventeenth Century. This solution’s treatment of value and money exposes the nature of bank tyranny while defining its replacement.

If you can do college-level calculus and program in Excel, then you can master SFEcon’s online e-book. Students doing so become equipped to challenge the Semitic content of their econ courses with objective demonstrations of efficient economic adjustment. Keyboard warriors might find amusement in pushing the evidence embodied in SFEcon’s prototypes onto economics message boards. Those in need of analytic challenges might formulate descriptions of economic potential that would quickly translate into plans for recovery from an economic collapse.

White Nationalism is currently creating meta-political networks that might be engaged by whatever authority emerges to re-order the chaos that will follow an anticipated crash of the international financial system. A cadre advancing European scientific methods into the field of economics would be an important node among these connections. The notion that enlightened economic command can achieve the optimality attributed to free-market capitalism needs propagating; and its acceptance would do much to advance White Nationalist cause.

[1] I was introduced to SFEcon through an MBA course in International Business Economics at the University of San Francisco in 1982.

[7] Williamson, Kevin: ‘The Cloud in the Machine’. National Review Online, May 22, 2014; as well as his CSPAN interview of Burton Folsom.

[13] Kurt Roemer’s ethnos is established by this reaction to his academic manifestation:
http://www.sfecon.com/1_Discussions/12_SFEcon/123_Orthodox/Proposition/Jacobin/Petition.pdf

Money for Nothing
US Credit Card Debt Balloons to $917 Billion
Cryptocurrencies: Will Central Bankers Board the Train?
The Endless Bailout
The Good Society
The Other Racial Spoils System
The 88 Precepts
Capitalism's Other Losses
Tags:Economic CalculationEconomicsSFEcon

Capitalism in America is rooted in heavy taxes, heavy debt and heavy interest rates. It’s a fraud. 3d world countries have economies that are virtually unmolested. The workers pay little or no taxes.

Nationalism destroyed statehood in America. It also led to the destruction of Germany.

The kinfolk states in the South were forced to associate with a parade of strangers.

From the Mr Proust’s article, paragraph 10: “The impossibility of economic calculation originated the atheistic Jew Ludwig von Mises [3] and its most ferocious living exponent is another atheistic Jew, Professor Walter E. Block of Loyola University New Orleans [4]. (Block openly favors reconvening the Nuremberg trials to deal with his ideological opponents [5].)” The citation from end note (5): “[5] See, for example: The Fed as a Criminal Organization. lewrockwell.com, January 23, 2012; and Won’t You Come Back, Alan Greenspan? lewrockwell.com, July 2, 2012” Mr Proust, I hate Jewish hegeomny as much as you, but you do White Nationlism a serious dis-service when you misrepresent someone’s written word, even if – nay, especially if – that person belongs to the adversary. Though his reasons may differ from yours, Block… Read more »

We are now entering the twilight zone. This is when White pride will be put to the test. At a time when being prideful of one’s heritage is considered “racist” and “bigoted”, particularly towards those who are of White colour, it will be very difficult to stand up for Whites in general without being condemned by the Jewish media and from “progressive” politics – i.e. Marxism. There is another very important and very dangerous dilemma, or should I say, phenomenon, that is indeed changing the dynamic of the 21st century, which is, this new aged liberal Western ideology that is rapidly changing the discourse of our societal affairs. Too bad people remain ignorant to the Jewish power structure and avoid said discussion, either because they remain ignorant and continue to… Read more »