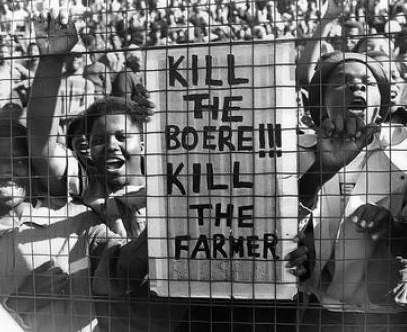 THE AMERICAN press in recent months has carried a number of reports of protests by South African students against their government’s policy of racial separation, or apartheid. “White Students Rebelling Against Government Discrimination,” the Reuters reports shriek, followed by vivid accounts of truncheon-wielding policemen wading into crowds of peacefully protesting students and brutally cracking skulls left and right. One news story told of policemen chasing students from the University of Cape Town who sought refuge in St. George’s Cathedral, battering them senseless, and dragging them out, leaving pools of blood among the pews. (ILLUSTRATION: Since the fall of apartheid in 1994, South Africa has increasingly become a locus of slaughter, rape, torture, poverty, and Black-on-White genocide — with near-zero coverage from the mass media.)

Editorial comment accompanying these reports creates the impression that the idealistic, fair-minded young people of South Africa abhor the racial policies of their backward and repressive government and are striving to bring about an end to apartheid and establish Black-White equality.

As is often the case with press coverage of domestic issues, all in South Africa is not quite as the newspapers would lead us to believe.

In order to understand the true state of affairs in South Africa it is first necessary to recognize that there are three distinct “White” communities in that country: Afrikaans-speakers (Boers), English-speaking Gentiles, and Jews (who also speak English).

The Boers, as the country’s largest White community, are politically dominant and are represented principally through the National Party. They were the original settlers of South Africa and have a strong sense of racial identity and racial pride. They have been able to prevent, to a substantial extent, the subversion of their institutions by alien elements.

The English-speaking Gentiles are a mixed bag. The majority of them also have a sense of racial pride and support their government’s policy of apartheid. But they have lost control of their institutions. Like their English-speaking kinsmen around the world, they have been infected with neo-liberalism. They are brainwashed by their newspapers and in their schools and churches. A minority have fallen into decadence and become enemies of their people.

The Jews are the real worm in the South African apple. Flocking to South Africa after the discovery of gold and diamonds there, they concentrated in the largest cities and had soon staked their claim to a lion’s share of the economic action.

Jews have grown to number more than 15 percent of the population of Johannesburg, South Africa’s largest city, and they completely dominate the financial and mercantile life there. Since the English population is much more urbanized than the Afrikaner population, many of whom remain farmers, it is principally the English who have been affected by the Jewish presence.

A Jewess, Helen Suzman, heads South Africa’s neo-liberal Progressive Party and is the only representative of that party in the parliament. There she regularly releases tirades against the entire structure of apartheid, including the laws against miscegenation. The Oppenheimer press gives extensive coverage to her views.

It is in the universities, however, that the Jewish spirit really manifests itself. As in America, all Jews of college age are students, so that they constitute a numerically strong and well-organized radical element at several of the major South African universities. The student protestors whose demonstrations have been recently reported in the American press were more than 50 percent Jewish (although this interesting statistic was omitted from the press reports).

Likewise, when police broke up a communist ring a few years ago which had been supplying arms to Black revolutionary groups and attempting to foment a rebellion against White rule in South Africa, all the ringleaders were found to be either Jewish students or Jewish professors.

Thus, despite misleading indications to the contrary, the Whites of South Africa remain one of the most racially self-conscious and spiritually healthy White populations on the planet. Because they have failed to curb a viciously destructive group of aliens in their midst, however, they are in the beginning stages of dissolution and decadence. And, because of their minority status in a sea of hostile Blacks, decadence is a luxury which the Whites of South Africa cannot afford.

From Attack! No. 16, 1972, transcribed by Anthony Collins and edited by Vanessa Neubauer, from the book The Best of Attack! and National Vanguard, edited by Kevin Alfred Strom

The “neo-liberal Progressive Party” of yesteryear which the Oppenheimer Jews financed during Apartheid still exists today and are the biggest opposition to the ruling black ANC party. Today, they are called the Democratic Alliance (DA) and are still controlled and run by Jews such as Tony Leon and Helen Zille , although they have recently appointed a black face puppet so they can claim to be more “racially diverse” than in their past.

The Democratic Alliance, or DA also have fellow Jews masquerading as ANC members in top ANC positions who have used their influence to promote a black billionaire Jewish created businessman affirmative action PUPPET to the position of Deputy President of the country. He is next in line to replace president Jacob Zuma, since Jacob Zuma doesn’t always do as he is told and has been fiddling with the power of the Jewish Judiciary (Jewdiciary / courts). The Democratic Alliance are the real rulers of South Africa through their financial control their Jewish backer have had over South Africa for decades. It is true, they were behind the fall of Apartheid, but only so they could take over control for themselves. The only change after 1994 has been a change in… Read more »

PS – This deputy president that they are behind is called Cyril Ramaphosa, you can Google him and see who was behind his new found wealth.