The Unmentionable Question of Ethnic Interests 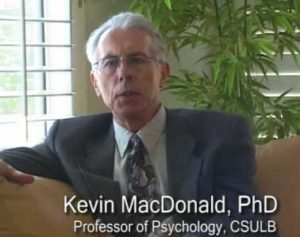 If 10,000 Bantu emigrate to England, the English lose the genetic equivalent of 10,854 White children.

ARGUMENTS OVER immigration are usually limited to cultural or economic factors. Political scientists like Samuel Huntington point out that the culture of the country will change dramatically if there is a continued influx of Spanish-speaking immigrants. And economists like George Borjas have demonstrated that large masses of newcomers depress wages and create enormous demands on the environment and on public services, especially health care and education.

These lines of argument are, of course, legitimate. But there always seems to be an element of timidity present. No one wants to talk about the 800-lb. gorilla sitting over there in the corner—the issue of ethnic interests.

Any attempt to bring up the ethnic issue is usually strangled in the cradle. Indeed, other lines of argument are frequently met by assertions that they are masking ethnic concerns. Thus immigration enthusiasts are quick to smear arguments that immigration will harm the environment as “the greening of hate.”

This strategy has been highly effective—because, if there is one area where the intellectual left has won a complete and decisive victory, it is in pathologizing any consideration by the European majority of the United States of its own ethnic interests. By “pathologizing” I mean not only that people have been indoctrinated that their commonsense perceptions of race and ethnicity are an “illusion,” but, further, that the slightest assertion of ethnic self-interest or consciousness by the European majority of the United States is the sign of a grave moral defect—so grave that it is a matter of psychiatric concern.

Of course, this is hypocritical. While assertions of ethnic interest by Europeans are stigmatized, assertions of ethnic interest by other groups are utterly commonplace. Mexican activists loudly advertise their goal of reconquering the Southwestern United States via immigration from Mexico—which would obviously be in the ethnic interests of Mexicans but would presumably harm the interests of European-Americans. Jewish organizations, in the forefront of the intellectual and political battle to pathologize the ethnic interests of European Americans, have simultaneously been deeply involved in organizing coalitions of minority ethnic groups to assert their political interests in Congress and in the workplace. Plus the Jewish effort on behalf of their ethnic brethren in Israel is legendary—and can only be described as awesomely effective.

I believe we should get rid of the hypocrisy and discuss ethnic interests openly and honestly.

Until recently, ethnic interests were understood intuitively by everyone. People have an interest, or “stake” in their ethnic group in exactly the same way that parents have a genetic interest in raising their children. By bringing up my children, I ensure that my unique genes are passed on to the next generation. This is the fundamental principle of Darwin’s theory of evolution. But in defending my ethnic interests, I am doing the same thing—ensuring that the genetic uniqueness of my ethnic group is passed into the next generation.

And this is the case even if I don’t have children myself: I succeed genetically when my ethnic group as a whole prospers.

A major step forward in the scientific analysis of ethnicity is Frank Salter’s book On Genetic Interests: Family, Ethny, and Humanity in an Age of Mass Migration. Salter’s basic purpose is to quantify how much genetic overlap people in the same ethnic group or race share, as compared to people from different ethnic groups or races.

Different human ethnic groups and races have been separated for thousands of years. During this period, they have evolved some genetic distinctiveness.

But, Salter notes, measuring these differences is now a straightforward process, thanks to the work of researchers like Luigi Cavalli-Sforza whose book The History and Geography of Human Genes documents the genetic distances between human groups.

Salter suggests we think of it this way: citing authors like Garret Hardin and E. O. Wilson, he argues that we can’t just keep on expanding our numbers and usage of resources indefinitely. If immigrants contribute to the economy in ways that the native population cannot, the national carrying capacity is raised. But if they are a drain on resources or even of average productivity, they must take the place of potential native-born in the ultimate total population. It’s a zero-sum game.

Let’s suppose that immigrants have equal capacities to the native born. Then if 10,000 Danes emigrate to England and ultimately substitute for 10,000 English natives, the average Englishman loses the genetic equivalent of 167 children (or siblings) in the ultimate total population, because of the close genetic relationship between Denmark and England This is not a great loss.

However, if 10,000 Bantu emigrate to England and substitute for 10,000 English natives, the average Englishman loses the genetic equivalent of 10,854 children (or siblings).

And, of course, it works the opposite way as well: If 10,000 English emigrate to a Bantu territory and substitute for 10,000 Bantu natives, the average Bantu loses the equivalent of 10,854 children (or siblings).

This is a staggering loss. Small wonder that people tend to resist the immigration of others into their territory. At stake is an enormous family of close relatives. And history is replete with examples of displacement migration—for example, Europeans displacing Native Americans, Jews displacing Palestinians in Israel, Albanians displacing Serbs from Kosovo.

All of the losers in these struggles would have been better off genetically and every other way, if they had prevented the immigration of the group that eventually came to dominate the area.

Nevertheless, the big story of immigration since World War II is that wealthy Western societies, with economic opportunities and a high level of public goods such as medical care and education, have become magnets for immigration from around the world. Because of this immigration, and high fertility among many immigrant ethnic groups, the result is rapid displacement of the founding populations, not only in the United States, but also in Australia, Belgium, Canada, France, and The Netherlands, Germany and Italy.

If present trends continue, the United States’ founding European-derived population is set to become a minority by the middle of this century. In the British Isles, the submergence date is just two generations later, around 2100.

The Unmentionable Question of Ethnic Interests