UK Black Gangster: “No limits to the depths of depravity” 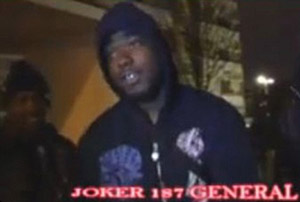 Africans are far more prone to violence, and other acts that we instinctively consider immoral, than Whites. Herewith the price Britain is paying for its importation of its former Third World subjects.

IN THE UK, A DEPRAVED gang leader (pictured) who filmed himself forcing a 91-year-old woman and her elderly care-giver to commit sex acts at knife-point has been jailed indefinitely for an attack that filled a judge with ‘utter revulsion.’

Michael Lewis, 21, who led the Brixton Hill Blood gang in south London, is believed to have made the film as a ‘trophy’ to show other members.

The fiend broke into the 91-year-old woman’s flat and filmed her carrying out sex acts with her elderly carer before cutting the phone line and threatening to return if they called the police.

Lewis, known as ‘Joker 187 General’ – 187 being the code for murder in the US – will serve at least eight years before he can be considered for parole after being branded a ‘danger to the public.’

‘Through physical force, controlled aggression and at knifepoint he forced the younger woman to perform a number of degrading and humiliating sexual acts,’ she said.

‘He further terrified the two women by cutting the phone line and threatening to kill them a number of times.’

She said the carer had tried to fend Lewis off when he first barged in.

‘She tried to push the door shut but he was too strong,’ she said. ‘He got behind her, grabbed her shoulders and as if he knew where she was going, forced her towards her friend’s front door.’

They went into the resident’s room and found her sitting on her bed. She told him to get out but Lewis growled: ‘Tell her to be quiet, or I’ll hurt you.’

The carer did as she was told and he assaulted her as the older woman continued to scream.

He warned: ‘Tell her to stop, because for me killing is no fear.’

The carer led him to a jar containing £100 hoping to end their ordeal but Lewis, who continues to deny his involvement, kept going.

The attacks – captured on his phone – continued for several more minutes while the courageous older woman tried to fight him off with her walking stick.

‘Her carer was shaking so much she could not stand,’ Miss Etherton added.

He eventually returned his blade to his waistband and fled, warning: ‘No police or I’ll be back.’ He stole money and the carer’s mobile phone.

The shell-shocked carer began writing down an account of what had happened, before finishing her chores and handing over to the next helper.

She went home and took two baths but said nothing to her husband and continued with her own household duties.

The following day she went to the police but only to try and stop an attack on someone else.

She described Lewis’ hunched stance and DNA tests on a body hair found stuck to some carpet tape led officers to him.

Mobile cell site evidence and CCTV from a nearby takeaway also suggested he had been very near the scene that night.

Paul Raudnitz, defending, said Lewis had a ‘troubled and difficult’ upbringing with a ‘violent’ father and a mother jailed for 12 years for drug trafficking when he was just 12. He worked occasionally as a security guard at music festivals.

Lewis, of Vauxhall, south-west London, was found guilty of false imprisonment, false imprisonment with intent to commit a sexual offence, robbery, sexual assault, causing a person to engage in sexual activity without consent, assault by penetration and making threats to kill.

Read the full article at the Daily Mail

Are the Races Equally Intelligent?

Daily mail have shut off the comment section-obviously this doesn’t agree with the narrative of civilised blacks enriching backward European countries.

Reading this made me angry though-I have grandparents that age-if someone did that to them regardless of their race I will set them on fire. Does that sound extreme? I actually think it’s pretty reasonable.

But having said the no colour thing 9 times out of ten its usually an African or Pakistani.

They necklace each other in Afreaka-I think the British judiciary deserve that without a trial, given their wordy heads are far up their ani so you could not affix it to their fat bourgeois necks…the Daily Mail is the Dayan Mohel, a holohoax article per week rag for the Anglo Brexit Blimps still fighting crypto-Nazi Merkel for, probably, Stalin.

UK Black Gangster: “No limits to the depths of depravity”