Richard Nixon knew of the illegitimate power of the Jewish establishment, but nevertheless was forced to do its bidding in most important policy areas.

OUR STORY begins on the afternoon of July 3, 1971. We join President Richard Nixon as he is talking to White House aide Charles Colson. Nixon and Colson [who had been discussing anti-administration activities in the Bureau of Labor Statistics] had the following exchange (according to a July 3, 1971, tape widely publicized on its release by the National Archives in 1999):

Nixon: Well, listen, are they all Jews over there?

Colson: Every one of them. Well, a couple of exceptions.

Colson: You know goddamn well they’re out to kill us.

Nixon: All right, I want a look at any sensitive areas around where Jews are involved, Bob. See, the Jews are all through the government, and we have got to get in those areas. We’ve got to get a man in charge who is not Jewish to control the Jewish … do you understand?

Haldeman: I sure do.

Nixon: The government is full of Jews. Second, most Jews are disloyal. You know what I mean? You have a [White House Counsel Leonard] Garment and a [National Security Adviser Henry] Kissinger and, frankly, a [White House speechwriter William] Safire, and, by God, they’re exceptions. But Bob, generally speaking, you can’t trust the bastards. They turn on you. Am I wrong or right?

Haldeman: Their whole orientation is against you. In this administration, anyway. And they are smart. They have the ability to do what they want to do—which—is to hurt us.

Three weeks pass. It is now the morning of July 24, 1971, and Nixon, fulminating about Daniel Ellsberg and the New York Times and administration leaks, finds his thoughts drifting back to the Bureau of Labor Statistics. What follows is from a second new Miller Center transcription (click here and scroll to the bottom):

Nixon: One other thing I want to know. Colson made an interesting study of the BLS crew. He found out of the 21—you remember he said last time—16 were Democrats. No, he told me in the car, 16 were registered Democrats, one was a registered Republican [inaudible] well, there may have been 23. And four were Declined to States. Now that doesn’t surprise me in BLS. The point that he did not get into that I want to know, Bob, how many were Jews? Out of the 23 in the BLS, would you get me that?

Haldeman: [White House deputy assistant] Alex [Butterfield] is getting it.

Nixon: There’s a Jewish cabal, you know, running through this, working with people like [Federal Reserve Chairman Arthur F.] Burns and the rest. And they all—they all only talk to Jews. Now, but there it is. But there’s the BLS staff. Now how the hell do you ever expect us to get anything from that staff, the raw data, let alone what the poor guys have to say [inaudible] that isn’t gonna be loaded against us? You understand?

Haldeman: Is Alex working on that?

Unidentified Person: [whispering] I’ll get this to you today….

Two days later, on July 26, Haldeman sends a memo to Malek. “What’s the status of your analysis of the BLS; specifically of the 21 key people?” Haldeman writes. “What is their demographic breakdown?”

Malek answers in a memo the following day. Out of 50 names on the organization chart, Malek has run down the party affiliations of 35. Twenty-five are Democrats, one is a Republican, and nine are either independents, not registered, or of unknown party affiliation. “In addition,” Malek writes (someone—presumably either Haldeman or Nixon himself—has underlined this sentence), “13 out of the 35 fit the other demographic criterion that was discussed.” Scribbled beneath this (I’m guessing by Haldeman) are the words, “Most of these are at the top.”

Read the full article at the Ron Corvus Web site 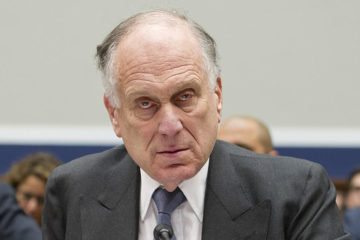 The Church is Dead, Long Live the Church | Spirit/Water/Blood

I’ve never forgotten the Nixon-Malek affair, because the article below single-handedly alerted me to Jewish power, something I had been completely unaware of until then. “Reprehensible.” “Foul, foul!” The excessiveness amazed me! Jews are by nature a cabal; they probably were trying to undermine Nixon. The obvious question was, “Why is it okay to count the heads of all other groups (quotas), but unforgivably anti-semitic to even notice Jews? The haughty Jewish demand for apology astounded me. It hadn’t yet become as revoltingly familiar as it is today. This was the first item I ever cut out of the paper to save, for what, I didn’t know. It was the first of hundreds. ___________________________________________________ Robert L. Turner in the Boston Globe – November 1991 It was just over 20 years… Read more »

Why the selective shouting of racism? Jews are disporportionately in high power positions. They also classifed themselves as ‘white’ to hide this disproportion.

Nixon may have been the last independent president. AIPAC is the most powerful lobby and the high rates of immigration to the West is a unilateral move that Jewish multiculturalism promotes. Does Israel practice multiculturalism?

I pray for a new Martin Luther King in the 21st century. One that will travel to Israel and will bring about civil rights and equality there. As a jew, I think this is necessary.

Not sure what that has to do with your tribe’s role in destroying President Nixon, Mr. Burrell, but good luck with your prayer.

“Dick Nixon before he dicks you” was the joke back in the early 1970s. That phrase can be seen in a new light with the book that was just released this summer: The Real Watergate Scandal: Collusion, Conspiracy, and the Plot That Brought Nixon Down by Geoff Shepard.

View Mr. Shepard’s eye-opening C-SPAN BOOKTV talk here: http://www.c-span.org/video/?327683-1/geoff-shepard-real-watergate-scandal The Watergate Judge John Serica and his anti-Nixon accomplices, mostly Democrats, some being Jews, are skewered as crooked, secret plotters who used illegal, criminal means to remove a sitting POTUS because they didn’t like him.