Her words are inspiring and moving, and the round of applause when Cyndi Steele’s attorney calls for a real investigation of the Washington regime’s motives for prosecuting Edgar Steele is a magnificent moment. You must see this video.

MY NAME IS Cyndi Steele and my husband is Edgar Steele. I am grateful to be alive today, and thank God for looking after me. I am grateful to people like Josh Young at the Fastlane Quick Lube, and the Bomb Squad for just doing their job. Thank you. You are my heroes.

At the same time, I want the business owners on US Highway 95, who had to close their doors while we were all taken back by this bomb scare, to know that I am greatly concerned for their losses Caused by Larry Fairfax, who planted that bomb under my car.

I am here today because I am very concerned for everyone’s safety. You should be very concerned, too, that the FBI refuses to do their job; they refuse to properly prosecute Larry Fairfax and they have failed to arrest, charge and prosecute the unnamed accomplices of Larry Fairfax. I want to know WHY?

Meanwhile, my husband is currently in jail, in solitary confinement, at the hands of the FBI and the government for something he didn’t do, which was plotted by the FBI’s informant Larry Fairfax.

Larry Fairfax who committed the crimes, as supported by his admission to attaching a bomb to my car, in order to cover up for his theft of $45,000 in silver coins. He came forward when he knew Ed was catching on to his stealing.

What he did, by attaching the bomb, was so horrible and dangerous that he should not get off with an 18-month sentence. He allowed me to drive almost a thousand miles with a bomb under my car. Larry Fairfax put the rest of Idaho, Washington and Oregon at risk of a pipe bomb explosion.

Although Larry Fairfax attempted to murder me, over the money he stole from us, I don’t wish him any harm. I just want the Government to make sure he won’t harm me or anyone else again.

Previously, my life has been threatened by others in this great Country we call America, but those have only been threats; which seems to go along with our freedom. But this was more than a threat – it was a real attempt at my life and put so many others at risk, too.

Now, I ask that you set aside personal judgments of my husband’s thoughts and ideas. Do you know that his favorite expression is: “Equal rights for all, Special rights for none”? Ed is a First Amendment lawyer. He has always represented people with non-mainstream ideologies. He has made sure that the politically incorrect, the unwashed and the unvarnished had representation.

We have been married 25 years. Ed loves me and I love him and we are best friends. He is caring, kind, charitable, supportive and full of integrity. He is grateful to me and has always seen me as his “Rock” and knows that in the past six months, before he was arrested, I’ve done my best to nurse him back to health when he almost died of not one, two aneurisms. At the same time being unselfish, because he knew how important it was to me to tend to my Mom’s serious health issues.

Ed cares deeply for my mother. He has helped her in numerous ways through the years, always welcomed her to our home and encouraged me to visit her as often as possible. Recently Ed showed his love for her by saving her mortgage. It was totally Ed’s idea this spring to pay $3,000 out of his pocket, so that she would have a place to live as her health declined. Ed has no motive to kill either of us.

So, no matter what your perception is of my husband, I would ask you to give him the same presumption of innocence that is due to all Americans regardless of race, creed, color, ideology, sex or any other unique characteristic. In my husband’s words “It is Character that counts” no matter who one is.

My husband is innocent, and the only reason the FBI put him in JAIL is to silence him. It is interesting that the politically incorrect are persecuted, who express ideas, that the FBI feels are somehow dangerous and simply not PC.

Larry Fairfax’s case is really about attempted murder, not manufacturing a weapon, which is the charge the government wants to allow him to plead to.

Ed Steele’s case is really about freedom of speech, NOT murder-for-hire.

Neither my mother nor I will be safe until the FBI and government ensures that Larry Fairfax is properly brought to justice and they arrest, charge and seek justice on his accomplices.

My life and the lives of every American will never be the same if the FBI and government does not do the right thing and free my husband, who is INNOCENT.

Mrs. Steele is asking for one dollar from anyone who wants to correct the injustices caused by the criminal charges against her husband. Go to www.free-edgar-steele.com to learn more about how you can help, or send a check payable to the “Edgar Steele Defense Fund,” P.O. Box 1255, Sagle, ID 83860 or you may make a donation online at http://www.free-edgar-steele.com/?page_id=70 . Thank you.

Courageous Cyndi Steele Stands for Truth
The Day of the Rat
Victory Frenzy
When the Fix is In
What We Killed
Cyndi Steele: FBI Wants to Silence My Husband
Estonia: The Electricity of Racial Nationalism
Russian Girls Trapped in Sex-Slave Nightmare
Tags:Cyndi SteeleEdgar J. SteeleFalse prosecutionVideo 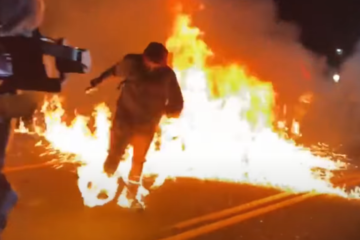 I am in awe of your strength and your courage, Cyndi Steele. Stay strong and I will be sending a donation today!

The prosecutor and the people who induced the prosecutor to charge Steele in this case, the most unbelievably improbable “murder-for-hire” case that the world has ever seen, evidently did not figure on the high character of Mrs. Steele.

Let’s keep the pressure on and make sure that everyone who can read knows the truth about this case.